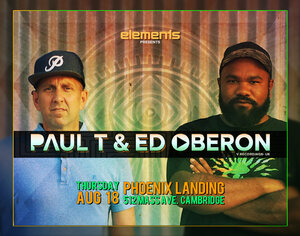 Leading lights of the V Recordings roster, the dirty soul stylings of Paul T & Edward Oberon have been tearing up dancefloors since 2012. But the roots go a lot deeper.

The journey of Paul T and Edward Oberon collectively began with attending the dnb hotspots of the time, exchanging ideas and catching the production bug. The years passed and a definitive sound started to take shape. After garnering support of Djs and a slew of releases on various drum and bass imprints, the duo decided to tackle not only new sounds but new endeavours.

With a shared love for blending emotion and grittiness in their music, it was almost inevitable Paul and Edward's paths would cross, and their unique brand of energetic, dirty soul would connect with an ever-growing audience. Anthems like 'Wake Up', 'Look for the Light', 'Stomp' and collaborations with Serum 'Moon in Your Eyes' 'Take my Breath Away' have cemented their position as masters of genre defying DnB.

If you've enjoyed their earlier efforts, brace yourself as 2021 sees the release of their monumental debut album  'Strange Days'. Complete with all manner of peer collaborations – including the Cleveland Watkiss-laced 'Music's Got Soul' and 'Where Do We Go' featuring MC Fats – cuts from the project have already proven their rave-hyping credentials.

Of course, Paul T & Edward Oberon's creativity doesn't end in the studio or the editing floor. Anyone who's caught one of their electrifying back-to-back deejay performances will know that these two artists bring heat to music production and the dancefloor alike. The content of 'Strange Days' is burning a hole in their USBs. They are locked, loaded and ready to tour, showcasing their sound across the continents.

Globally-known to always bring an element of surprise to their sets, Paul and Edward have collectively smashed dancefloors from Eastern to Western Europe, the Americas and destinations in between. Moving your feet and your feelings since 2012, Paul T & Edward Oberon are stepping up to the next level. Watch this space.