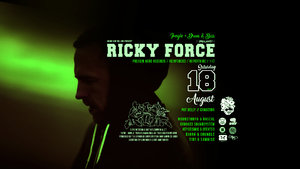 Headz are Rolling are back at it with another quality international booking. New subs have arrived just in time! Expect top shelf Jungle and Drum and Bass well into the early hours at The Pot Belly in Belconnen.

Based in Dublin, Ireland, Ricky Force started out on his musical path with the Bassbin crew, playing on legendary pirate radio station Power FM in the late '90s. Taking his cue from the golden era of Jungle and early Drum n Bass, Ricky spent years honing his skills, first on the decks, and then as a producer, but throughout, he stayed true to his passion for chopped-up rolling rhythms, and for the deepest of subs.

Moving to London in the early 2000's, Ricky lived with old friend Fracture, sharing a house previously occupied by Alix Perez and Rockwell. There, surrounded by a new generation of talent, Ricky focused on his production, taking the opportunity to learn and grow as a producer. Since then, he has gone from strength to strength, crafting his music into what is now a very distinctive style - a sound for which he is gaining increasing recognition worldwide.

Starting off with releases on DSCi4 and 36 Hertz, Ricky has by now notched up more than 20 vinyl releases for original old skool Jungle labels like AKO Recordings, Flex Records, Skeleton Recordings, and the mighty Reinforced - alongside their spiritual descendants at labels like Criterion and Repertoire. Meanwhile Ricky also continues to issue quality jams on his own label Pressin' Hard Records, which has made these limited edition cuts 'buy-on-sight' for connoisseurs of that original Jungle sound. And with support from such luminaries as Randall, Ray Keith, Scar, DJ Stretch, Mark Pritchard and Om Unit, you know that Ricky's tunes are guaranteed quality.

Behind the decks, Ricky's love of the music is evident in the care he takes to craft and deliver a set. Time and again, he's ripped the roof off parties across Europe and the USA: from Boomtown to Bangface, and from Rupture in London to Respect in L.A. Most recently, he rinsed it out at the Skeleton Vs. Repertoire night in London.

A Ricky Force set always delivers a sweet mix of brand new cuts with timeless classics, bolstered by a few choice esoteric selections guaranteed to make even those who know their tunes scratch their heads. But this is no old skool trainspotting exercise - a Ricky Force set is all about the dance, and Ricky never fails to bring the energy.


Pot Belly and Headz are Rolling policy:
- No Drinks beyond the beer garden
- NO DICKHEADS will be tolerated. NO EXCEPTIONS. Strictly 18+.

Bring on the bass!