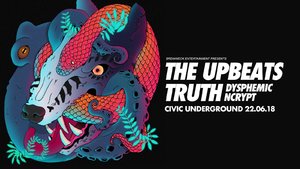 A powerhouse show of some of the finest talent, production and prowess in electronic music. So we’re heading back to the Civic Underground, with Prouwl on visuals, for some top notch drum and bass with a healthy dose of glitchy dubstep. This is gonna be a late one.
The Upbeats need no introduction, flexing their diversity and drive for interesting sounds, they’ve teamed up with a wealth of artists across multiple genres and projects, including No Sleep Til, and the Evolution series. Now, like a multi headed chimera, they descend upon Sydney once more, with the Wolf and Snake joining forces with the incredible and fierce Octopus Kiwi act, Truth.
Because we felt like you needed something a little extra to spice it up to the ghost pepper levels, we have added the outstanding stylings of two ex Blue Mountain folk who are no strangers to bass music in all its forms.
Dysphemic has been tearing up dance floors for years and his tunes are simply on another level, we couldn’t be happier to finally have him play with us and flex his dynamic wares… And of course, the robot warrior Ncrypt who has played a pivotal role in Breakneck and the Sydney scene as at murderous force on the decks.

Tickets from $30
ON SALE VIA THE TICKET FAIRY