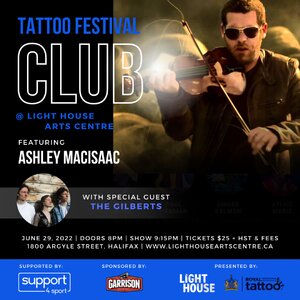 This evening's performance will feature legendary Cape Breton fiddler Ashley MacIsaac, who will be joined by special guests The Gilberts!

Ashley plays the fiddle with an intensity, authenticity and passion that is hard to deny. He learned his chops at an early age mentored by some of the legendary greats of the area, performing all over the Island in halls, clubs, barns and kitchens. Hi How Are You was released in the mid 90's and the accolades rolled in, the awards, the touring, the interviews and appearances, the persona took shape and the legend took hold.

The Gilberts are a sibling contemporary folk trio bringing vibrant three-part harmonies, soulful lyricism and melodious alchemy to their original songs with diverse influences including folk music from the 1960s to the current scene, choral, musical theatre, and singer-songwriters.

Vocal harmonies are at the heart of their music but all three are multi-instrumentalists and their song arrangements can include guitar, mandolin, ukulele, pedal steel, saxophone, trumpet, flute, percussion and Theremin.