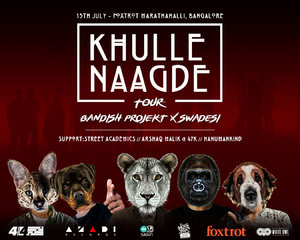 // ARSHAQ MALIK & 47K //
Arshaq Malik & 47K is a hip-hop duo from Bangalore/Chennai. Their debut collaborative album was released through independent hip-hop label, Elements, on 13th April 2019. The first single off the project, ‘Coming For Your Necks’ was released as a part of Elements’ “The Indian Hip-Hop Compilation Volume 1” in late 2018.

// HANUMANKIND //
Sooraj Cherukat AKA HanuManKind won the 2017 Mic Drop Tournament which recognizes up and coming rappers. Originally from Kerala, HanuManKind moved to Texas as a child. He returned to Bengaluru in 2015 and has been making music independently since. He brings out a fiery flow that immediately stands out, and he’s just getting started.