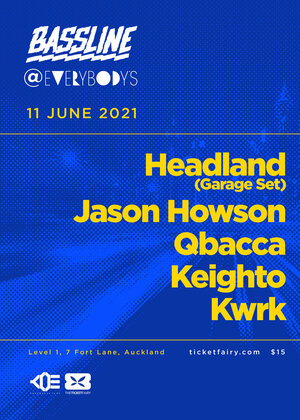 Bassline @ Everybody's is set to be a hallmark event for the venue and Auckland in general as one of only three UK garage and bassline focused dance music events on a weekend for the big city in the last two years. This night will feature a selection of New Zealand's finest UK garage and bassline selectors including the first ever garage set and debut Auckland set for legendary dubstep producer Headland and the return of Auckland's godfather of UK garage and grime, George FM Silk Cuts in Session co-host Jason Howson.

Note the venue has a dress code, so please dress to impress!

As far as bass-heavy music goes, you can’t look past New Zealand’s own Headland. The producer and DJ has made waves across the world playing at the mecca of bass music festivals, Outlook in Croatia, closing out the Moat stage in 2019 for their final year at the legendary Fort Punta Cristo, as well as Basscoast Festival in Canada. Headland has played with Alix Perez, V.I.V.E.K and Fixate across New Zealand, Electric Ave Festival in Christchurch and shows in Europe and America as well as spots on Rinse FM and Subtle FM. His style is bass music with a unique twist, offering up a techy, sci-fi flavour unlike any other.

Among his strong list of accolades is having his music released on iconic labels such as SYSTEM, Innamind Recordings, ZamZam Sounds & 1985. Back home in Christchurch, New Zealand he also has close ties with well-known sound systems, Eyesdown Sound and Subtle Sound System.

His connections in bass music run deep, collaborating with iconic names such as Alix Perez and releasing music on his label 1985. It’s safe to say Headland has a large part to play in the resurgence and redefinition of Dubstep and beyond.

Keen to do something a bit different Headland has recently found himself moving into UK garage, the roots of the dubstep sound. Come catch the very first set of it's kind from this pioneer of New Zealand bass music!

Born in 1971 in Auckland, where he remains based to this day, Howson got his start as a punk/hardcore singer in the eighties, before learning bass guitar and studying towards audio engineering qualifications at SAE. Having made mixtapes from a young age, in 1992 Howson and a friend collectively purchased their first set of DJ turntables and a mixer and started learning to mix with house and hip-hop records.

Informed by hip-hop DJing, alongside house, Howson quickly added jungle & drum and bass records to his selections before diving into UK garage, two-step, grime and eventually dubstep. Over his career he has been crucial in the development and popularisation of these genres within New Zealand. During this time he's been associated with and moved around a community of local DJs including Sean Lyons, Simon Grigg, DJ Sir-Vere, Stinky Jim, Nick Dwyer, Rob Salmon, Mark Burgess, Greg Churchill, Sam Hill, Grant Kearney, Paul Stothers, DJ Presha and D.Rave.

In 1998 he spent a year as a DJ on pirate radio while living in London. Having done the odd spot on the BPM show on 95bFM in the past, in 1999 Howson began his Silk Cuts In Session radio show on George FM with Sean Lyons, which over the next fifteen years, was an essential radio resource for fans of Two-Step, Hip-Hop, UK Garage, Drum and Bass, Grime and Dubstep, both in Auckland and across the nation.

Over his career, Jason’s technical skills as a DJ and intuitive ability to read dancefloors has seen him open for the likes of Zed Bias, Dizzee Rascal and Pendulum. He's also toured most of New Zealand and performed at festivals such as Phat, Rhythm & Vines, Northern Bass and Splore.

In 2002 Howson recorded the Silk Cuts In Session mix CD for Universal Music New Zealand. In 2009 he recorded the Every Day Dubs Vol.1 mix CD for Each And Every Records. Both immaculately presented and selected, both of these compilations became essential listening pieces within the local UK Garage/Two-Step and Dubstep scenes respectively.