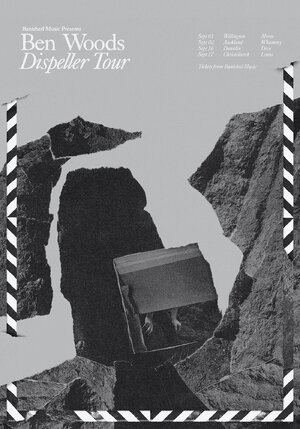 Ben Woods returns to touring this year in celebration of his newest album Dispeller.

After a successful tour in 2021, Ben is back to excite audiences and explore the limbo between considered lo-fi sounds and tuneful emotional verse with a full, live band,

On Dispeller, Woods’ intimate experiments in rock paint a vivid portrait. Here, Ben leans comfortably into intuition and abstraction. Expansive arrangements are anchored by heavy-lidded prose, while carrying the air of the portside shack it was made in.

Dispeller was recorded throughout a year in Woods’ hometown, Lyttelton, with Ben Edwards (Aldous Harding, Marlon Williams, Julia Jacklin) at the helm of the mixing console and co-producing. Utterings, footsteps, and the rattles of the room linger beneath the album’s dense instrumentation, alluding to the familiar space the songs were captured in. Here, Woods’ songs breathe and flourish into their own worlds. “I found my voice in trying to make atonality croon,” he says. “With Dispeller it was less about harmony — the blend was capturing the songs very honestly in the room, and still making each of them to transport you somewhere different.”

Tickets on sale Friday 17 June 8am