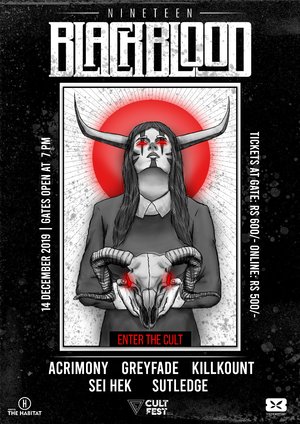 BlackBlood India is proud to present the 19th Edition of Blackblood - #EnterTheCult! This December, catch five explosive bands on a Saturday night at Above The Habitat! We bring to you relentless brutality from North with Killkount , modern metal band Acrimony from Bhopal, with punk core band GreyFade’s debut album launch, three-piece experimental / prog band Sei Hek and groove metal band Sutledge from Mumbai! This edition a build up to CultFest Lite Bangalore w/ As I Lay Dying in India.

Acrimony
When tagged, they prefer being called a "New Wave of Indian Metal" band, because of their fondness towards heavy metal and Indian classical music, yet “Modern Progressive Metalcore” best describes Acrimony’s basic approach towards its sound. The band experiments continually with its sound, which stretches wide enough to incorporate elements of ample sub-genres of metal, progressive structures, calculated juxtapositions and Indian classical styles. From their diverse backgrounds, they’ve brought forth their own influences to the table - societal as well as musical, and consequently, the band's eventual sound has come out to be abundantly varied.
Acrimony will be supporting As I Lay Dying at CultFest Lite in Bangalore, January 2020.

Killkount
A perfect blend of speed and deadly groove, KillKount is everything you want your Death Metal to be in this modern age.

Mixing up various styles and sub-genres, KillKount has created a sound they can proudly call their own.


Sei Hek
In the Manipuri language (Meiteilon), the term "Seihek" refers to the melody and rhythm of a musical composition. Sei Hek was officially formed with the aim of creating new refreshing waves of music through multiple genres that had influenced them. They guarantee to deliver musical hooks, rhythmic madness, lush harmonies, you name it.

GreyFade
GreyFade is a punk core band from Mumbai, India. They will be launching their debut album titled ‘Cardboard Pastries’ at this edition of Blackblood!

Sutledge
A four-piece thrash / groove metal band from Mumbai. Their influences vary from thrash to power groove and death metal bands, blending these elements together in their music.

About Blackblood:
Blackblood India is an 18 edition strong DIY heavy metal gig series that takes place in Mumbai, India. With Habitat as the new home, Blackblood aims to expose its hometown and the far reaches of the country by showcasing some brilliant bands across genres of metal under one roof once every two months. In the past editions, Blackblood has seen some of India’s finest metal bands such as Noiseware, Godless, Systemhouse 33, Plague Throat, Primitiv, Albatross, Atmosfear, Orchid, Dirge, Elemental, Amorphia to name a few. With a steady growing fan base in Mumbai, the gig is almost a bi-monthly property, the only metal staple the city has seen since late in 2018.