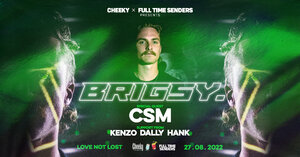 -- BRIGSY --
BRIGSY. began his DJ career in early 2019 and was inducted to the DJ scene whilst travelling the UK. This was the catalyst which inspired his love for electronic music. Since returning to New Zealand, BRIGSY. has become a much loved drum & bass artist and personality who has made his mark as a formadle DJ in our flourishing music scene.

BRIGSY. Has had the amazing opportunity to support some of our biggest electronic artists and internationals. His support accolades include; The Upbeats, Flowidus, Gray, Crossy, Kelvin373, Montell2099, Enei, Pola & Bryson, Artificial Intelligence and Bou.

A man of the regions blessed with the common touch. A proficient selector and one of New Zealand's most exciting prospects of the ‘new school’ electronic artist.
-- KENZO --
Kenzo is a 21 year old female DJ who is based out of Hamilton & Auckland. She only begun DJing in July 2021 but don’t let that stop you from thinking this five-foot two pocket rocket from packing a serious punch with her variety of drum and bass heavy hitters!

Kenzo has been in and around the events scene for a while now and has been itching to get herself behind the decks.

Kenzo made her debut in The Back Bar and has since played several clubs in the Waikato and Auckland Regions as well as Mardi Gras and Soundsplash Festival.

-- CSM --
Over the last 2 years, CSM has began to solidify himself as a regular in the local Christchurch scene. Having built his brand through university events and parties such as Mono nights, Garden Party and Tea party, he has already seen some time playing at larger NZ events such as Rhythm and Vines and Soundsplash. On top of this, he has also seen time supporting many international artists across the country such as Hedex, Friction, Flowidus, Shockone, Murdock and many more.

His high energy and fast paced style of mixing will keep you entertained for the entirety of a set, with Jump Up and Dancefloor vibes being his main sources of ammunition.

In regard to producing, CSM has continued to develop his sound. Currently with 2 releases on Spotify, you can expect to see a lot of new music later this year and in 2021.

$8 Cheeky if you're feelin' it!
TLDR;
WHEN: Saturday August 27th - 22:00 - 03:00
WHERE: Love Not Lost, 24 Allen Street
HOW: Limited tickets available on Ticketfairy.
WHY: That's the question we must all ask ourselves
TopInfluencers