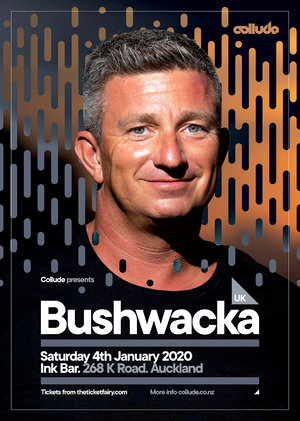 When you think of pioneers of the 90's dance movement there isn't one electronic music enthusiast of this era that wouldn't have drawn inspiration from artists like Layo & Bushwacka.

Fast forward a few decades and Bushwacka is still headlining stages from Glastonbury Festival and releasing his latest productions with the likes of Get Physical Music and Crosstown Rebels. Catch him for an intimate night down at New Zealand's longest running house and techno venue - InkBar.

BIO:
Matthew ‘Bushwacka’ B, a percussionist in the London School Symphony Orchestra who was converted into a member of the infamous Rat Pack after a warehouse party in ’88, has been DJing for over 30 years now. From that first Acid House experience Matthew quickly started playing all over London, holding residencies at four of the most famous clubs in town by the time he was 18 years old. From London the gigs spread countrywide, doing up to 8 shows a weekend, and then into Europe and the USA by 1992.

It was via a mutual friend Mr C that Layo & Bushwacka! first met, whilst Matthew was working at his studio, and by the mid 90s the two had started writing music together. Over a decade later, the partnership has yielded three artist albums, three mix albums, internationally renowned club residencies and a superb record label.

By 1999 they’d already composed their debut album, ‘Low Life’, released on End Recordings, the label spawned by The End. The album announced the arrival of the duo as a force in electronic music, with a record that brought together electro, house and breakbeat fused with blues, dub and downtempo, all underpinned and informed by their collective experience of underground culture. This inclusive and open minded approach to sound became the blueprint for their future work.

Their sophomore album followed in 2002, this time released on the mighty XL Recordings. Entitled ‘Night Works’, the record featured their unforgettable top ten hit ‘Love Story’, and took their sound onto a bigger and broader canvas, charting all over the in the process. The accompanying live show brought further acclaim with stunning shows from Homelands to Sonar, whilst their famous DJ sets had now garnered residencies at some of the world’s finest clubs including Space in Ibiza, Warung in Brasil and of course The End in London. While this explosion was happening, Matthew was also achieving huge solo success with his remixes for Depeche Mode, his bootleg of Michael Jackson’s Billie Jean, and getting phone calls from Madonna wanting him to work on her music. It was a crazy time.

Their End residency, known as All Night Long, became one of the capital’s most revered nights with Layo & Bushwacka! taking the club through an edifying tour-de-force of electronic music.

When The End closed its doors for the last time in 2009, Layo and Bushwacka! started the Shake It brand and threw amazing warehouse parties all over London, booking Carl Cox, Richie Hawtin, Magda, Laurent Garnier and many other friends, and created dancefloor destruction for 4 years. The parties were legendary, the energy incredible.


Layo & Bushwacka!’s reputation as two of the world’s foremost DJ duos is rock solid. Four artist albums have proven them remarkably talented producers, capable of mixing styles, tempos and genres to create enduring and engaging electronic music. Their trio of mix albums and international club residencies have shown they are masters of the turntables, sonic connoisseurs who can guide a dance floor on an epic journey through the many facets of their sound. Their label Olmeto meanwhile has become a bastion for quality, a label that, much like its figureheads, has become a rubber stamped seal of class, and many of their vinyl only releases have become sought after rarities.

In 2013 Bushwacka! took some time out to focus on his solo Just Be project, recording on Crosstown Rebels, Get Physical and Intec, while Layo created a new empire in Soho, of world class restaurants, applying his magic touch to everything he does. Five years later, Bushwacka! started touring and recording again under his original name, only on select shows and keeping it special for the fans, old and new.

Fast forward to 2019, and Bushwacka! has been releasing massive tracks – starting with his classic track The Healer, with remixes from himself, Carl Cox, Sasha, M.A.N.D.Y and Denney – and just released a second banging single on Ultra Records – Get Up, with remix from Mason Manyard. Bushwacka is currently remixing for Archie Hamilton, Bedrock Records, Richy Achmed, and writing new music for Eats Everything. On top of this he is rereleasing vinyl only limited tracks from his Plank Records catalog, and other rarities. Gig wise, this summer Bushwacka! has focussed on his Ibiza shows, with his residency at Pikes, the opening and closing of Resistance at Privilege, regular slots at the Zoo Project, and Blue Marlin shows, with South America, New York, headlining the Glade again at Glastonbury festival, and a select few Layo and Bushwacka! shows this year.