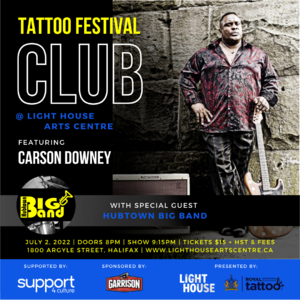 Based out of Truro Nova Scotia, The Hub Town Big Band is an 20 piece modern jazz ensemble, led by bassist and music teacher John MacLeod.

At first glance, the discovery of the Carson Downey Band in 1997 looks like an overnight success story. The president of a record company just happened to overhear the band playing through a door that stood ajar. Impressed by the combination of blues and rock that was the Canadian band's sound, he looked in and was stunned by the sight of the guitarist using his teeth to play the instrument. On the spot, the music executive approached the band about a record deal. While the anecdote is true, success took far longer than overnight. The band had been together for about two decades and had built a regional following. Members first billed themselves as Big City Blues Band and Little City Blues Band. The Canadian group, which formed near Halifax in the town of North Preston, caught a lucky break when it played a showcase that was slated around the same time as the East Coast Music Awards (ECMA). Andrew McCain, head of Loggerhead Records, heard them play. It wasn't long before the group was on its way and Loggerhead released the band's debut album, All the Way, which was recorded in 1999.

The band's driving blend of blues and rock ignited a flurry of interest and drew a number of honors, including the Fender East Coast Guitarist of the Year in 2000. In 2001, the band won a pair of ECMAs for Best Blues Group and Best New Artist. That same year, it earned Drummer of the Year and Best New Artist at the Maple Blues Awards and Artist of the Year and Album of the Year at the African Nova Scotian Music Awards. A half-dozen Real Blues Awards followed, including Best Live Act and Best Debut CD. In addition, the band walked off with The Dutch Mason Award. They have performed all over the world playing in Afghanistan for the troops as well as South Korea, Honolulu, Guam, Marshall Islands, China and Tokyo to name a few. The band is composed of guitarist and lead vocalist Carson Downey, bassist Marlowe Smith, and drummer Murray Downey, who is Carson's brother.