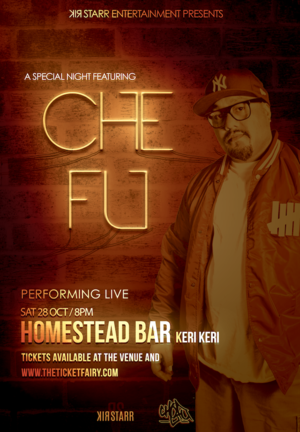 With the most Top 10 songs from any individual in New Zealand music history, Che-Fu is one of the country's most successful and beloved recording artists.

Originally coming to attention as a founding member of the iconic Kiwi band 'Supergroove', Che went on to forge a solo career unrivaled in its success and the trail that it blazed not only for hip hop, but Kiwi music.

Che writes and produces all his own music as well as writing the treatments and directing for all his music videos. Che is also an established club DJ having had a number of residence throughout NZ which earned him the right to judge at NZ DMC's and ITF's DJ competitions.

Che has undertaken a number of marketing campaigns over the years including the following: Saatchi & Saatchi, Telecom, All Blacks, Bartercard, Vodafone, Ford, 'Pick it Up', Fizz