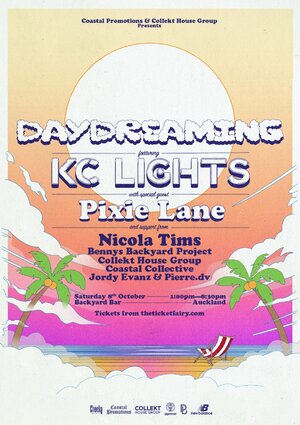 As the days grow longer and the climate warmer, Daydreaming provides you with the first sunset session of the season.

The first iteration of Daydreaming is headlined by house music royalty, KC Lights. Having risen to the forefront of the genre in recent years, KC Lights’ captivating and signature sound has seen him take the world by storm. Gracing stages from Coachella to Tomorrowland.

On special guest duties we have the incredible Wahine talent that is Pixie Lane. Our support lineup features a diverse range of local artists, all of which have made their mark on the Auckland and National scene.

Centered around an all-inclusive and diverse ethos, our aim is to create a safe space environment that welcomes people from all walks of life.

Everyone who purchases a ticket within the first week of on sale gets access to an exclusive New Balance discount code!!

Thanks to our sponsors at Jagermeister, Cheeky Tea Co and New Balance!!

Following an explosive few years, Scotland's multi-talented musician/DJ/producer KC Lights has firmly established himself as one of the most exciting UK talents on the scene. He grew up on a small island off the West Coast of Scotland, the Isle of Bute, and music grabbed his attention from an early age, with his love for composing and performing leading him to an honours degree and multiple awards at University. After a trip to Ibiza in his teens, KC Lights fell in love with electronic music.

This new passion, along with his eclectic musical background, has since evolved his expansive production range and uplifting DJ style, with fans touting his unique take on house music.

He has become a regular on the Ibiza circuit, with performances in Amnesia, Hii, Pacha, Eden & more, cementing him as one of the top household names on the scene.

KC Lights' signature sound has him ended up on label and artist request lists to remix some of the world's most prominent artists, including Ed Sheeran, Alicia Keys, Becky Hill, Jax Jones, MK, Regard, Sigma, 220 Kid, and Topic, Khalid, Marshmello, along with countless others, pooling 200+ million streams on Spotify alone.

In fact, his pre-pandemic hit, “Sol ‘’ was one of the most heard tracks of 2019 on 1001 Tracklist’s end of year chart and his recent crossover hits "Cold Light", “Girl”, and “Share a Little Love” have also grabbed over One Million Shazams.