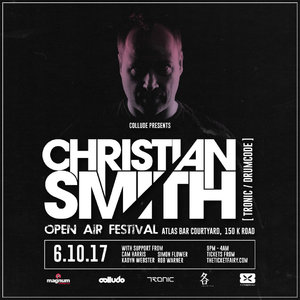 We are ecstatic to announce that after the success of Drumcode front man Adam Beyer visiting our shores back in April, that yet another artist from this label is to visit our shores, He's also in charge of the number 3 techno label in the world Tronic Music, and has dominated the charts for numerous decades, none other than Christian Smith & in what better circumstances with a open air location in the heart of Auckland CBD, its a taste of europe right here in NZ.

Limited early-birds available for $32.00, get these while they last, prices will go up once these are sold-out - https://goo.gl/7h3h1E

BIO.
Christian Smith is one of the world’s leading exponents of techno, both as a DJ and producer he is always bold and innovative, leading rather than following. With his output in recent years it is hard to imagine a list of prolific producers without his name towards the top.
He has consistently dominated charts and DJs playlists with a steady flow of releases on high profile labels like Drumcode, Plus8/Minus, Cocoon and his own Tronic imprint.

Christian Smith has operated at the top of his game for over a decade now, with his trademark housy techno. His latest album "Input-Output" (Tronic 2016), the follow-up to his critically acclaimed ”Stranger Than Paradise” (Tronic, 2014), has secured worldwide praise with a superb dancefloor orientated selection of tracks that explore and showcase his various styles within the techno genre: musical, peak-time and minimal.

Christian’s Tronic label is also one of the top 3 selling techno labels in the world according to Beatport and Christian has also recently celebrated the landmark of Tronic’s 200th release. Another success story is Tronic Radio, a weekly show now syndicated to over 100 stations around the globe. Christian’s touring schedule is busier than ever, including regular Tronic parties in London, Miami, Tokyo, Buenos Aires, Barcelona, Amsterdam, New York, Madrid. With yearly guest spots at Richie Hawtin’s “Enter” events, and many Festivals around the world it is certain that Christian will maintain his relevance and position as one of the main ambassadors of techno.