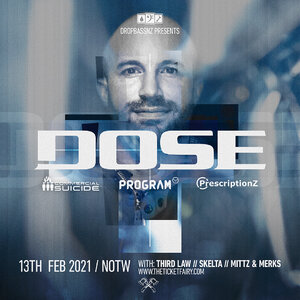 Dose first got into Drum & Bass in Christchurch New Zealand, his home town, in the late 90’s. As a fanatical party goer the weekend hobby soon became an obsession moving onto buying records, DJing and eventually learning to write music. Dose’s first club DJ set was at Christchurch NZ’s “Base” night-club at the age of 18 as part of a DJ collective called “Company Wrekt” or “Co.Wrekt” as it was later known as. Co.Wrekt became hugely popular in Christchurch with gigs most often rammed and the group quickly built a name for themselves across NZ.

Years on Dose progressed on to develop as a solo artist and as he delved more into the production and established his first release with DJ Optiv (Cause 4 Concern) on Red Light Recordings in 2007. This was to be the first of many with Dose having now over 140 tracks released internationally proving to be one of the most productive NZ drum and bass artists.

From 2008-2014 Dose toured Australia, New Zealand and Europe. Living in London from 2010-2012 Dose was billed for gigs was such as Andy C’s RAM Records night at Fabric and Renegade Hardware’s regular events at Area Club in London.

Dose has released on and worked with many of the bigger labels such as Andy’C’s Ram Records & ProGram Records, DJ Frictions SGN:LTD, Concord Dawn’s Uprising Recordings and much more. His debut LP released on Klute’s Commercial Suicide imprint in 2014 titled “Mind the Future”. He has also collaborated on music with international artists such as The Upbeats, Trei, Prolix and more.

Moving to the present day Dose recently moved back to New Zealand after 4 years focusing on his non-music career. 2020 has already seen 2 x EPs and 4 singles from Dose which have had a great reception from Radio stations such as RDU 98.5FM Christchurch and leading into 2021 Dose has a new 2 Part EP “Time and Space” due for release on Huski Music at the very soon in which he’ll be touring a string of release gigs across Australia and New Zealand.

When it comes to DJing, Dose started out as a DJ so has got what it takes. His sets regularly feature a good mix of his own original works, his best picks from other NZ artists and a selection of diverse music from around the world. His sets reflect his production style with a diverse mix of music from soulful and deeper sounds, to hard and heavy.