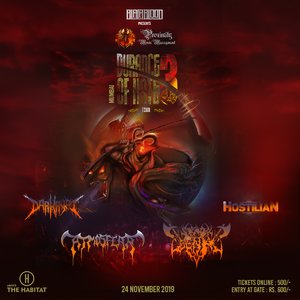 ATMOSFEAR
Atmosfear is a three-piece Death Metal outfit from Mumbai, India who’ve struck the nations metal circuit with over a decade of existence. The band has firmly established its sublime blend of extreme aggression infused with undertones of groove. Their self titled debut album was released independently on all digital platforms and via a mini tour in the country through September - October 2017. The album was rated as one of the most downloaded albums of the year by online music aggregator Oklisten.com and was also nominated for the RadioCity Freedom Awards 5. They will be playing songs from their debut self titled album and more at the show!

DARKRYPT
Darkrypt is a Death Metal band from Mumbai. Their debut album ‘Delirious Excursion’ was released in October 2016 through Transcending Obscurity. With the critical aspects of the album being the Scandinavian Death Metal sound, the album also features a few collaborations including vocals by the legendary Rogue Johansson (song - “Cryptic Illusions”). The four-piece band is ready to slay with their intense live performances.

HOSTILIAN
Hostilian is a six-piece experimental groove metal band from Hyderabad, India. They’ve released two EPs since they started off in 2016 - Monolith (2017) and Catalyst (2019). They find it hard to classify their music into a style or genre, but one thing that sticks throughout is GROOVE.

STARK DENIAL
Stark Denial is a black metal band from Mumbai, India. The band’s music not only encompasses the true essence of black metal but also is a true reflection of how black metal music should be presented in its unadulterated form. The band believes in writing and playing music that’s pure black metal and is an extension of their musical philosophies that drives the band to push the boundaries. Stark is not a band that’s afraid to experiment & expand their creativity but at the same time ensure their music stays true and pure to their black metal roots.

Shout out to Habitat and Ticket Fairy India for the support!
See you in the pit \m/

About Blackblood:
Blackblood India is an 18 edition strong DIY heavy metal gig series that takes place in Mumbai, India. With Habitat as the new home, Blackblood aims to expose its hometown and the far reaches of the country by showcasing some brilliant bands across genres of metal under one roof once every two months. In the past editions, Blackblood has seen some of India’s finest metal bands such as Noiseware, Godless, Systemhouse 33, Plague Throat, Primitiv, Albatross, Atmosfear, Orchid, Dirge, Elemental, Amorphia to name a few. With a steady growing fan base in Mumbai, the gig is almost a bi-monthly property, the only metal staple the city has seen in the past year.

About Proximity Music Management
Proximity Music Management has been involved with Artist Management, PR, Booking since it’s inception and has worked with several renowned Metal bands from India, Asia, Europe etc., The venture offers yet another tour this season. With a string of successful tours focused around Metal bands over the last few years; the venture has turned one notch higher with the return of Durance of Hate Tour series.

DURANCE OF HATE TOUR strikes back with its Third Edition this year. The idea of this tour was to have multiple bands tour India together.