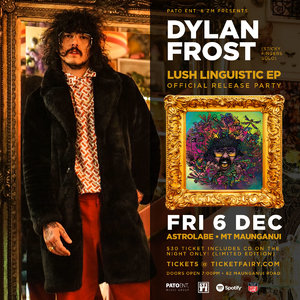 “Dylan Frost can see and hear the music he wants to write in his head before he gets into the studio. Dylan operates on another frequency to anyone else, he’s multi-dimensional and the real rock 'n' roll deal.” – Laughton Kora

"He's raw and pure expression. Music is the vehicle for that expression. This EP is the closest you'll get to being inside Dylan's head." – Tiki Taane

Since creating Sticky Fingers after meeting the lads one dusty night on the grungy roads of King Street, Newtown in Sydney Australia, the enigmatic front man – Dylan Frost – has risen to become a household name and an Australian rock and roll icon.

Dylan’s journey has been anything but smooth-sailing and although he’s courted controversy, he has remained focused and hell bent on evolving. Finding peace within the darkness of his past, and vanquishing the flames, he is now introducing the world to his unique blend of Aotearoa roots ‘n’ rock.

Working with acclaimed and respected songwriters, musicians and producers Tiki Taane and Laughton Kora (KORA), with help from manager and music impresario Pato Alvarez and his close kings and queens, Dylan has been supported in answering some hugely tough and personal questions.

“I’ve had some of the darkest times in these past couple years. Coming home to New Zealand to collaborate with legends I grew up listening to is a blessing,” says Dylan.