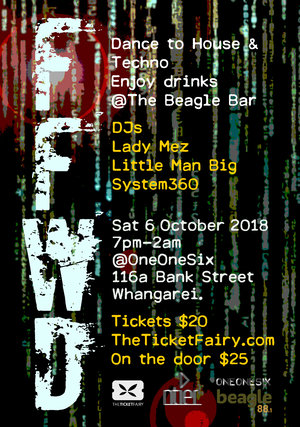 Introducing FFWD, a chance for Whangarei to celebrate with a night of underground dance music brought to you this month by DJ’s Lady Mez, Little Man Big and System360. An immersive atmosphere with the classic sounds of Detroit and Chicago this is a rare treat for Northland. The venue, OneOneSix, is a community venue that houses Beagle Radio and will have a fully licensed bar on the night.

Gavin began his involvement with music DJing around Nottingham as part of Giddy Fruit, a group of like minded friends inspired by the sounds of local heroes such as DiY and Go Tropo. They would commandeer their own and friends' houses , cover them in decor and fill them with speakers and invite a club full of strangers to enjoy their first forays into public performance.

Over the years the Giddy Fruit sound could be found in local clubs, at their own "Giddy Up" nights or guesting for other events. Towards the end of the 90s Gavin began to get interested in "the studio" and in 1999 co-wrote two tracks on the 1999 To-Ka Project EP on Viva, "Don't Cry", his first vinyl release.

By now Gavin had been a regular at parties in the midlands of UK thrown by Smokescreen Soundsystem, where he met Steve Lee, who had been playing for Smokescreen since his early teens and was himself starting to make his first attempts at making music. Gav and Steve found they shared a drive to make music and began working together.

Calling themselves The Littlemen the pair had their first major release on Drop Music in 2001 and then went on a run of around 20 vinyl EPs in the next 7 years, including highly respected labels such as Amenti, Lowdown, Tango, Nightshift and Aroma. They also founded a label, Mobile Trax, which put out a string of excellent releases between 2003-2006.

By 2008 Gavin was also writing solo material and put out his debut tracks on Guess Who? and Guesthouse. He has since then put out several releases on Mobile Trax as well as EP's and remixes for labels such as Aroma, Myna, and Odour.

Over this period The Littlemen travelled extensively, taking in events as diverse as Glastonbury festival, and Miami Music Conference, clubs such as Fabric and Ministry of Sound, and playing to enthusiastic crowds all over the world.

In 2015 Gavin relocated with his family to New Zealand where he has been putting on events under the moniker "Love Bug" in Auckland and around Northland. He is still releasing music, on local label HuHu and, in 2017, on Replay Records.

With her collection of vinyl gathered from Black Market Records, Vinyl Solution, Uptown Records and Honest Jon’s, Mez returned home to NZ. Meeting up with like minded DJ’s, Mez was invited to join the DJ lineup for the Underground Strut dance parties that were being held at the time in various venues around Auckland.

She began DJing under the name Lady Mez at The Garage Bar on Ponsonby Rd with a Friday night residency, laying down a 4 hour set that solidified her signature style. Other residencies included The Crow Bar, playing both in the main room and in the upstairs lounge bar.

Mez was a regular on the scene in the 90’s and played alongside Auckland’s finest at Calibre, and The Kase and was on the support lineup for, Johnny Fiasco, Phil Asher and UK Garage Boss - Norris Windross.

She took time out from Djing to have a family and now resides just north of Auckland.

Currently she is managing Them On The Hill record label and has recently played at Little Man Big’s Lovebug parties.

System360 is passionate about exploring sounds from the simplicity of analog circuitry and uses classic synths and drum machines to define his dance music essentials. Beats and bass are usually heard emanating deep in the secluded northland gorge where this producer resides. Always inhabiting the underground fringes, System360 (AKA Walter Yeoman), brings it all to the table when he gets behind the decks, to effect a shift in an audience that immerses them in a liquid, resonating journey of dance through to the other side that’s called techno.