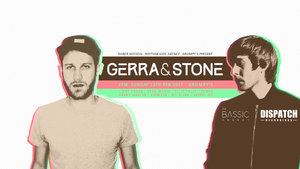 Harry Hackett & David Stone aka Gerra & stone have risen rapidly through the drum & bass world over the last 3 years. From initially appearing on the scene via Basher's Proximity label, and then releasing the standout track 'Droneheads' on Alignment records it was clear they were intent on making a mark within the 170BPM scene.

2013 saw the duo sign to to the legendary Dispatch recordings with their single 'Backhand/ Tenfold', followed by the chart topping 'Too Deep' EP in 2104 which caught the attention of some of the genres biggest names. Ever evolving and expanding, Gerra & Stone sealed a 12" release with Ram Records offshoot ProgRam 'Ison/ Vengeance', followed by the track 'L.I.E.S' which featured on Ram Records 2014 annual compilation and also 'Running Back' on the Ram Miami 2015 album. This breakthrough spawned the attention of promoters around the EU filling up their diary with bookings from the mountains of Bulgaria to the beaches of Croatia and many places in between. Now a regular feature at Outlook festival they show no signs of stopping the momentum of their DJ career, which is evident in the pair having been invited onto both BBC Radio 1 and 1xtra at only half way through the year.

July has seen the pair drop their eagerly anticipated Dispatch Recordings EP "Unbreakable" which shows yet another side of their ever evolving spectrum of sounds. The release features the talents of rising star Lucy Kitchen on vocals coupled with live recorded jazz keys from