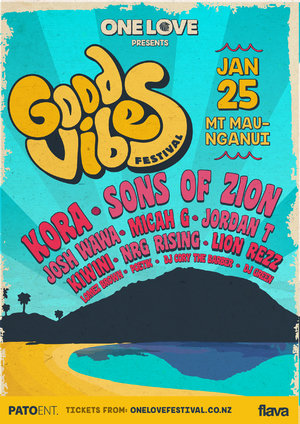 Good Vibes Festival is coming to the Bay of Plenty

The One Love Festival is upping the ante in 2019 and launching Good Vibes - a sister festival, featuring an array of local and international acts, setting the scene for three days of the finest roots, rock and reggae around.

Good Vibes Festival will be held at Soper Reserve, Mount Maunganui on Friday, January 25, before One Love 2019 kicks off at Tauranga Domain over Auckland anniversary weekend (Saturday, January 26 and Sunday, January 27).

One of the reasons for launching the Good Vibes Festival is to develop new acts to perform at future One Love festivals, as well as feature music heavyweights.

The exciting Good Vibes Festival line-up for 2019 features festival favourites and crowd pleasers, the legendary Kora and the super hot Sons of Zion.

Josh Wawa is an exciting addition. Wawa, who last week announced a 4-date New Zealand tour for August, is one of the most requested acts for One Love every year and is looking forward to returning in 2019 as he showcases new music as well as the favourites.

Tickets to Good Vibes go on sale August 2 at 7.00pm at www.onelovefestival.co.nz

There is an Earlybird sale on August 1 at 7.00pm. Pre-register for Earlybird tickets HERE

The addition of Good Vibes to the One Love Festival fray makes way for a fun-filled Auckland Anniversary weekend in the Bay of Plenty, near some of the country’s most beautiful beaches. It will also provide entertainment for the tens of thousands of punters who flood into Tauranga early for the One Love Festival, which is now in its fifth year and drew a record crowd of 18,000 earlier this year.

The One Love 2019 line-up includes headliners UB40, featuring Ali Campbell, Astro and Mickey Virtue. The chart-topping multi-platinum reggae-pop act will be performing as part of their ‘Real Labour of Love, 40th Anniversary World Tour’ with hit songs such as ‘Red Red Wine’, ‘(I Can’t Help) Falling In Love With You’, and ‘Kingston Town’.

Katchafire, FIJI, LAB, Aaradhna, Tomorrow People, General Fiyah, Paua, Common Unity and Cool Meditation are also on the bill, with another line-up announcement due in the next few weeks.

** More to be announced

** More to be announced

One Love tickets from www.onelovefestival.co.nz