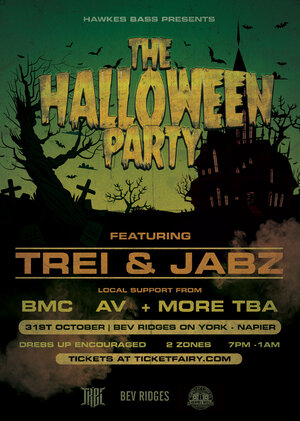 Let’s get spooky!
Headlines TREI & JABZ with two zones & dress ups! One not to be missed.
If you had already brought tickets to the TREI & JABZ show on September 12 these will be valid to use!
More details to come.
Tickets on sale 7pm - 17 September at Ticket Fairy a big chunk of tickets have already been sold due to Covid Level extensions and scheduling clashes. So be in quick!

Through a vast expedition designed by pushing the envelopes of drum and bass and carefully carving his name into the halls of the very genre itself, Trevor Linnell has been a foundational asset to dance music for over 13 years - and believe us when we say he’s just getting started. Time and time again, his versatility and ability to interject his signature style into his every tune shines through a canon of releases including individual heavyweight classics such as “Seeds”, “Rebels” with Tali, Empires, and many more.

Championing collaborations with high-profile artists such as The Upbeats, Futurebound, State Of Mind, and Concord Dawn, this maverick of a producer/ DJ has showcased his nonconformist discography to anxious listeners all around the world. Successfully embarking on over 25 European tours spanning across 22 countries to date, stating that Trei’s eccentric approach to songwriting and his insatiable ability to galvanize a live setting is impressive would be an understatement. Now, his energetic sets have seen stages at world class festivals such as Rampage, Let It Roll, Mainframe, Fusion Festival, Rhythm & Alps, and so many more.

With international untethered support from legendary acts such as Andy C, Friction, and Pendulum, it’s safe to say that his career’s achievements have transcended expectations. In an ever-changing world restricted by a lack of originality and regurgitated content, Trei, although achieving widespread recognition from the very beginning, has shown absolutely zero signs of stagnation. Expect a highly-anticipated flurry of technical productions paralleled by an unforgivably-unique performance setting from this creative mind. His next chapter, has only just begun.