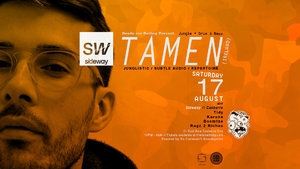 Tamen is a Barcelona based artist recently relocated to Melbourne who has been bringing his energetic Dj sets to cities such as Auckland, Berlin, Dublin, Hong Kong, London, Madrid, Paris and Romania as well as leading festivals such as Outlook in Croatia since 2000. He has shared the stage with artists such as Aphrodite, Bladerunner, Cern, Ed Solo, Fracture, Hype, Marcus Intalex, Om Unit and Remarc to name but a few.

Tamen represents Subtle Audio Recordings as an international DJ, which has been at the forefront of releasing forward thinking, breakbeat driven Drum´n´Bass for the last 10 years. It has co-released an album with Aphex Twin’s Rephlex label and receives regular Dj support from diverse names such as Bailey (Metalheadz), Thom Yorke (Radiohead), Mary Anne Hobbs, as well as Aphex Twin himself.

As a producer Tamen’s recent collaboration with Ricky Force was released on vinyl worldwide to quickly sell out on London’s Repertoire label, and has received much love and support internationally from top djs such as Digital, Sam Binga and Om Unit among many others. He has previously released on Melting Pot Records and Anticlockwise, and has much more music forthcoming in 2017.

He has promoted Jungle / Drum´n´Bass as well as Bass Music since 2005 with Surco & now Jungle Jungle, bringing and supporting a multitude of guests such as Fabio, Martyn, Phace, Presha (Samurai Records), Sabre (Ivy Lab), Scuba, Sully, Source Direct and Spirit among many others to Barcelona for the first time.

Bringing all this together Tamen’s selectah skills, tight mixing and crowd interaction squeeze in almost all sub-genres into a session of pure Junglistic fiyah!