ILLUMINA PRESENTS THE JOURNEY TO INDEPENDENCE 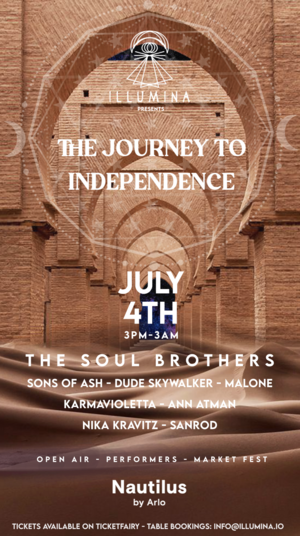 "THE JOURNEY TO INDEPENDENCE"

Let’s celebrate the Independence Day together !

Another special edition , On the beach , under the sunlight , then Until the moonlight …

No need to present you this international duo , the TSB are producing Hit after hits …

THE SONS OF ASH / ILLUMINA RECORDS

Founders , Conceptor and Art director of Illumina Tribe , The Sons of Ash is a collaboration between Johan Pfeiffer and Enzo Garoche , both of them dj's and producers , they decided to be united and spread , love through an ancestral deep techno music ...

Along with many remixes and other originals released in 2017, Malone released plenty of new music in 2018. With multiple tracks signed to labels such as Spinnin Deep, Armada Subjekt, Milk & Sugar, and Kryteria (Spinnin).

The Dude Skywalker , has time-traveled from the distant future to save the current state of dance music with the cosmic sounds of the forthcoming space age. Combining a signature eclectic vibe of space-funk, disco, hip-hop, soul and jazz with the moving beats of deep house and gritty techno, Dude Skywalker has all angles of the underground dance floor covered.

Singer/Songwriter, DJ's , from Moscow to Miami with Magic ,the duo will transport you between vocals and rhythms . the live is absolutely magical !

Atman is working on producing her own tracks. As part of the JANOVI duo project, partnered with Miami-based artist Jey RA, Atman has released new music focused on melodic techno and deep house. In collaboration with Star House Music, she is currently working on a second personal EP set for release in 2020. Atman’s next chapter is about to begin.

Nika Kravitz is bringing you into an electronic realm of Deep house melodies and rhythms. Incorporating tribal sounds and a middle eastern influence. Born in Moscow and currently based in Miami, Nika is focusing on storytelling through sound.

be a part of the community …