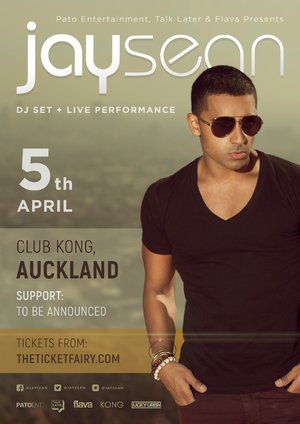 Dipping his toes into various urban genres, and living across different continents, it’s no surprise he’s harnessed his success by constantly evolving. Born in Hounslow, West London, Jay says, “The way I grew up shaped me as a human being and has definitely shaped my career. Where my family lived in London was heavily South Asian based, but I was fortunate to have a lot of cultural influences, especially at school, and so my way of interacting with the world was incredibly eclectic.”

Jay grew up on a diet of English pop music, but he eagerly absorbed the rich diversity of hip hop, r’n’b, reggae and dancehall influences around him, and although he briefly flirted with a career in medicine – “I was that dude who would do exams and dissections and cut people’s livers open and then at the evening I’d be doing gigs or working on my mix tapes” – fortunately his passion for music was victorious. After releasing a string of UK Top Ten smash hits such as “Eyes On You”, “Stolen” and “Ride It”, Jay was signed to iconic American label Cash Money Records in 2008 and released his US debut “Down”, which reached Number 1 on the Billboard Hot 100, eventually selling over six million copies in America alone. It was a defining moment, and Jay says, “When that happened, it was like an out of body experience, but then I was like ‘this is it, this is what I’m meant to do, keep going, don’t ever stop.’ Apart from releasing further hits like “Do You Remember”, “2012” and “I’m All Yours”, Jay has lived in New York for the last eight years, and he says, “The reason why I live here is that you dream a little bigger in America and my goals are definitely larger.”

He’s also collaborated with some of the biggest names in music, including Lil Wayne, Nicki Minaj, Pitbull, Sean Paul and Mary J Blige (to name a few), and he says, “All the people I’ve worked with, they’re people I looked up to and thought ‘one day I’d love to meet them.’ Fortunately, I’ve been able to meet them as such and all of our work has happened really organically. That way, you know it’s going to be something special.” This organic approach has influenced Jay’s brand new dancehall-infused single “Make My Love Go” which he invited his long-time friend Sean Paul to collaborate on with. Jay says, “I wrote this song last year and hit up Sean and asked him, ‘What do you think of this?’” We’d already worked together on “Do You Remember” and he said “Man, I love it, don’t let this one go. Let’s do it again!” “Make My Love Go” also features a sample from Maxi Priest’s global Number 1 “Close To You”, and is Jay’s first major release in three years, since leaving Cash Money, releasing two critically acclaimed mix tapes (The Mistress series) and signing a new deal with Sony Music (Via his own imprint Kamouflage Entertainment.) Jay’s never been more focused, announcing, “I’m so happy, I have a great label and management team, and there’s no Plan B with my career. I’m definitely on the right path.” “Make My
Love go”, has already amassed nearly 60million streams on Spotify and was a bonafide hit across Europe and the United Kingdom. His next musical release is with the Legendary DJ, Hardwell. Their song together, “Thinking About You” is already smoking up the world’s Spotify playlists and represents the perfect smoothness of Jay’s vocal delivery and Hardwell’s signature masterful production. On release week it was the #3 most added Spotify playlist song in the world. Never one to sit still, Jay is always looking to evolve and recently added the title “DJ” to his ever growing list of achievements.

Jay has already performed well-received sets in Vegas, Atlantic City, Miami, Los Angeles and more! He has since signed on with SKAM, one of America’s premier DJ agencies. “I see it as another way to see and connect with my fans and give them music,” “I take this very seriously”, he adds, “And I work just as hard at being good in this medium as I do being a singer”.

Thanks to:
Flava FM
Kong
TopInfluencers