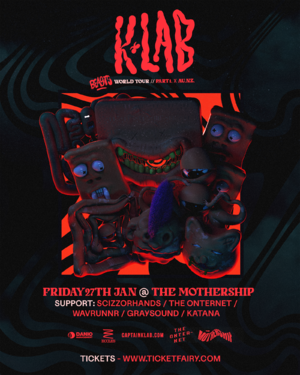 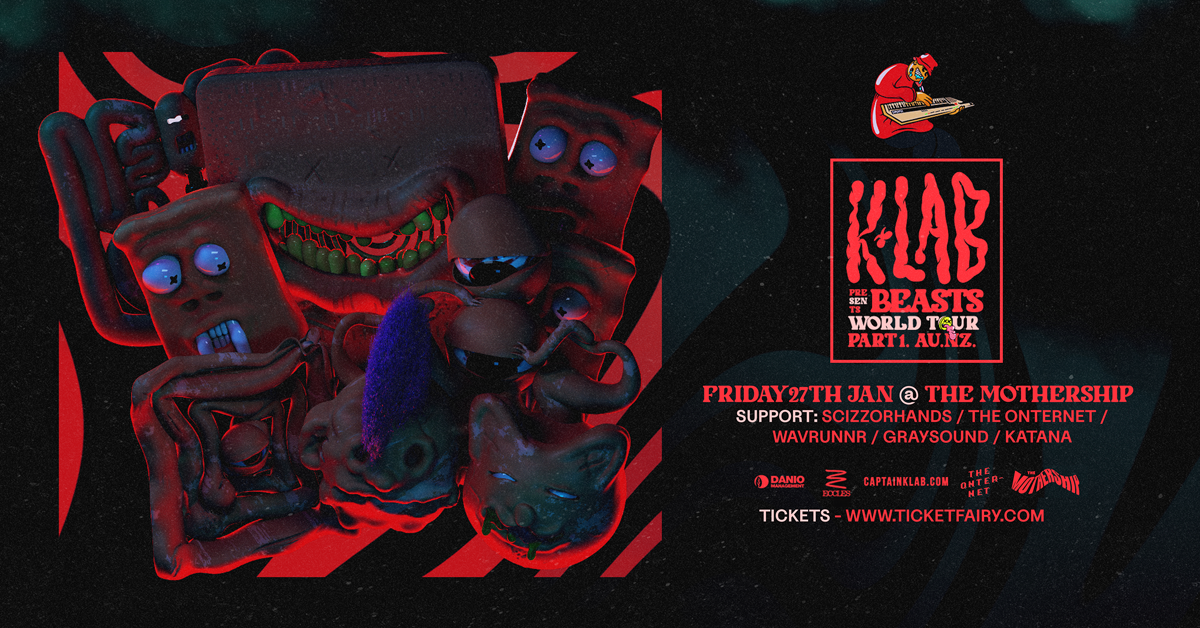 After a lengthy hiatus from Aotearoa, armed with his latest acclaimed album, a stellar support crew & straight ready for blast-off on Akl's punchiest Soundsystem

In a bold artistic departure, K+Lab delivers his fourth studio album, Beasts. The 13-track LP explores a heavier bass sound from the Aotearoa-born artist in a tradeoff of funk for darker inhibitions. With features including PAV4N, Cleva Thoughts, FarfetchD and more, K+Lab shares a spectrum of production shades that pay respect to the electronic underground and breakbeat era from eerie beats on “Quitter” to Def3-equipped hiphop weapon “Games,” and bass house warper “Swamps” with Canosis.

Written and conceived during the Covid-19 pandemic, Beasts became a form of creative catharsis for K+Lab, who simultaneously navigated change and challenges throughout the lockdown. Coming in full force, K+Lab redefines his funky signature as he looks to integrate his own original artwork into an exciting, immersive live show and visuals.

On the album, K+Lab says - "As we navigated the last few years through the pandemic, my goal was to not be the same person and artist I was pre-Covid. I figured being forced to pause was a great opportunity to really think about what K+Lab means going forward thus Beasts was created. I forced myself to stop and look the beasts in the eye; they’re all my fears, worries, and anxieties in musical and artistic form. The process was a massive release."

Master of intergalactic funk, K+Lab has been rocking dance floors and bringing the beats to the masses with his signature keytar in hand. K+Lab's sound draws from a seemingly endless array of influences from soul to jazz, hip hop to drum n’ bass, glitch to G funk - all tied together by an orbital pull of all things funky. His incredible live performances are unlike anything else occupying the sonic landscape today and have seen him conquer dancefloors across the globe with unmatched energy.

Hailing from West Auckland, New Zealand, Scizzorhands is a world-class Turntablist, heavily influenced by the likes of Mix Master Mike (Beastie Boys), DJ Rectangle and New Zealand’s own P-Money, Self-taught-Scizzorhands upskilled his scratching under the tutelage of New Zealand’s 2003 DMC World Champion DJ CXL. Putting these skills to use, Scizzorhands set his focus on being a great live performance DJ for a group called Numbers (later known as Eddie Numbers). In 2012 he made his debut at Red Bull Thre3style New Zealand Final, despite being the underdog, he took-out the competition and became the NZ Red Bull Thre3style Champion, which saw him fly the flag for New Zealand at the 2012 Red Bull Thre3Style World Final in Chicago. Eager to showcase his skills in every way, shape and form, Scizzorhands has shared the stage with DJs such as Boogie Blind, Skratch Bastid, DJ CRAZE, DJ Total Eclipse, Jazzy Jeff and Z-Trip. He has also opened for acts like Pharoahe Monch, Mobb Deep and De La Soul, and DJ'ed for the legendary Slum Village and Guilty Simpson on their recent trips down under. Taking out the Northern DMC Championship and 3rd place at the Neck Of The Woods Scratch Battle in 2015, Scizzorhands is always pushing the envelope with new routines and a style of his own. Currently you’ll find Scizzorhands holding down radio shows on Base FM and Radio BurgerFuel, and tutoring the next generation of DJs at MAINZ (Music and Audio Institute of New Zealand). He is a huge part of New Zealand’s Turntablist community and helps to push forward the art form and bring the skill set to new eyes through his unique showcasing style and party rocking.

The ONternet is an award-winning Open-format Turntablist DJ that brings both musicality and technicality to the forefront of this performances -
'It's not what you play, it's how you play it!'
Notorious for his dynamic and multi-layered mixtapes he has also been super-charging parties for over 20 years, now freshly returned from a 12-year stint in the UK touring the festival circuit and gracing stages at Glastonbury, Boomtown, and Secret Garden Party - to name just a few.... :)
Now firmly back in Aotearoa he has been steadily turning heads and rearing crowd gun-fingers with accolades that include: Finalist at the European Redbull Th3style comp, runner-up for the  Cafe Mambo x Absout DJ Comp and recently making the Shortlist for the 'Defected Records Un-sung Hero's' comp -
(arguably, the world's largest online DJ comp with over 4,400 entries), recent interviews and guest sets/appearances on radio shows Base FM & 95BFM & multiple club
residencies.
@the_onternet

Homegrown DJ/Producer and Curator/Owner of the Port Dubs Collective sound system.
Graysound has many genres in his melting pot of productions, his sets vary from light to dark but are always bass-heavy. Expect flavours of Reggae, Dub, Roots, Funk, Hip hop, Glitch hop, Grime, Drum & bass, Dubstep and everything in between.
Find his releases on various labels here: https://soundcloud.com/graysoundnz
& here: https://www.instagram.com/graysound_nz/

KATANA has been mixing tracks and producing beats in his adopted hometown of Auckland for nearly two decades. KATANAs sound bends the boundaries of Electronic, hip-hop, RnB, and Trap. A dedicated leader in the scene, KATANA founded Bassment; as a creative platform to showcase upcoming local producers. Bassment was created through KATANAs vision to make the industry a more inclusive experience for all.