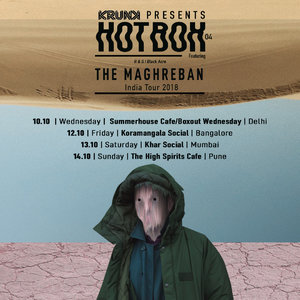 The Maghreban aka Ayman Rostom is one of the most unique and respected beat makers working in house and techno today. His dusky grooves, heavy bass pressure and clanking drum breaks sound like they were dredged from the bottom of the river Nile, imbued with a maverick personality that shares kinship with the likes of Detroit’s Andres and Waajed, making him a perfect fit on R&S’s storied roster of pioneering outsiders.

In the past four years, he has released a slew of hotly tipped 12”s, mainly on his own label, Zoot, as well as French label Versatile and Bristolian beat mongers Black Acre.
Also known as acclaimed hip-hop producer Dr Zygote (also one half of Eglo’s Strange U) Rostom has gained a reputation as a producer's producer, garnering heavyweight tastemaker support from the likes of Benji B, Ben UFO, Nicolas Jaar, Trevor Jackson and many others.

At the bleeding edge of his own future, Zokhuma (Arman Menzies) represents the end of old things, the beginning of new ones, and a forged alliance with those making alternative electronic music in previously uncharted territories. Unafraid to criss-cross between soundscapes you’ve never heard—think frantic, chopped-up African beats or moodier, experimental electronica—and soundscapes that are all too familiar, his sensibilities have a way of putting any audience at ease. As does his infectious energy behind the console.

The 26-year-old maverick has a mask for every occasion too. Well known in cult progressive metal circles in India for his earlier work songwriting and playing guitar for Goddess Gagged before moving on to study music production in the UK, he’s already performed in places like Croatia, Netherlands and Sri Lanka under his new moniker while cherry-picking his way through local gigs as well.

Bombay-based Dreamstates has a hazy approach to house and techno. Driven by 4x4 patterns, spanning breakbeat, acid, afro, disco and outsider house, but not afraid to stray into a deeper, more unnerving sound - with an eye on what the moment calls for. A Dreamstates night is usually a colourful and varied journey. A resident DJ on Boxout.FM, he also runs a monthly podcast series, aptly titled 'Cosmic Claps', created keeping in mind those introspective moments when you need an undulating beat to keep you going. This is music that seeps into your subconscious. Think shades of house, hints of techno and a touch of the eclectic – always arriving while constantly in an urgent state of departure.