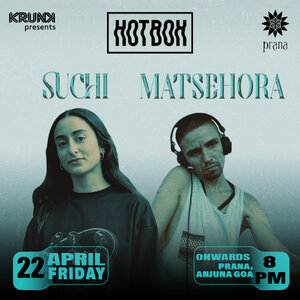 Suchi:
She hosts a monthly show on Boxout FM called 'Through The Smog' and is part of the South Asian collective, Daytimers
As a DJ, her selections combine the right touch of percussive drums, Indian disco, 90s prog house, UK breaks, trance, electro, and techno. A genre-blending approach that comes from her close links to local producers based in all three of her hometowns. Her mission to place South Asian producers on the map is prominent throughout her sets and mixes, including her Boiler Room debut alongside Daytimers.
Matsehora:
Matsehora is the embodiment of Underground. His musical journey has taken him from his motherland Ukraine, to also living, DJing and organsing events in Goa, Tbilisi and Sri Lanka. Amongst many directions of sound, he loves playing dubby and soulful micro-house records.
Mixology is another arrow to his bow and his recent projects include: consulting and curating at Cafe Gallery in Tbilisi, developing the bar at Kureni, Kiev’s legendary Closer Club’s new venture, and co-founding wagmi, a tropical cocktail bar with a focus on music and design, in Galle, Sri Lanka