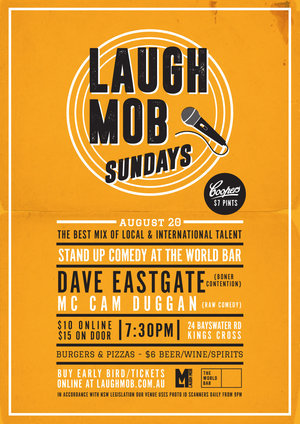 Laugh Mob is proudly bringing the best local and international stand-up talent to The World Bar in Kings Cross each and every Sunday, with the lineup for this Sunday August 20th featuring headliner Dave Eastgate (Boner Contention) and MC Cam Duggan (RAW Comedy)!

Dave Eastgate is an actor, stand-up comedian, writer and musician who hails from Queensland’s Gold Coast in and lives in Sydney, Australia.

Dave has written for and starred in two top rating ABC1 sketch comedy series’, The Elegant Gentleman’s Guide to Knife Fighting and Wednesday Night Fever where Dave was also the Musical Director of the show with his heavy metal group, Boner Contention, serving as the house band.

Dave’s background as a performer began as a child growing up in Port Moresby, Papua New Guinea, one of the top 5 most dangerous city’s in the world, where Dave’s Dad was stationed in the Australian Army. Dave’s Mum found a local performing arts school and he took to it like a child possesed! By 16 Dave was on the Gold Coast performing characters, stunts and music in the theme parks, theatre restaurants and comedy clubs of the famous Queensland resort town.

By 21 Dave was performing his own characters, stunts and music at Universal Studios Japan in Osaka. Dave also toured as frontman for a Japanese punk band, performed Japanese stand-up comedy and made several TV and radio appearances in fluent Japanese, which can all be viewed at You Tube on the Eastgate Tube channel.

Dave returned from Japan in 2006 and now resides in Sydney between frequent interstate and overseas tours.