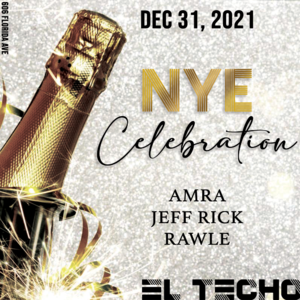 Come celebrate New Years Eve at DC's favourite rooftop. We've got our local favorites blessing the decks all night with a wide and exciting range of house and techno music.

AMRA
Amra was born and raised in Alexandria Egypt. He moved to Washington DC in 2005 to pursue his dreams— one of which was his unwavering love for music, and all things that music encompassed: Culture, community, fashion. Knowing that it was his calling, he decided to make a career switch and dive into the music scene whole heartedly. Starting first with Esoteric Productions, Amr curated and hosted a popular series of rooftop day-parties known as Get Closer. With the pandemic closing many doors, it opened just as many new ones. He spent much of his time during the pandemic in Egypt, cultivating his creativity and harnessing his unique tribal/oriental style of house music in a way he had never done before. And it was during this time that he gave birth to DJ AMRA. DJ AMRA is a resident DJ and co-founder of Transcend Events.

D.C.’s own Rawle Night long has a penchant for driving basslines and tribal drum rhythms that stem from his love of world music. He has honed his technical DJ ability in clubs and on stages around the country, from D.C. and New York to San Diego, all with the intent of bringing his extensive dance music knowledge and vibe to dance floors that can handle it. As A&R and co-founder of D.C. based record label Chub Rub, Rawle has a keen ear for club-ready records, and through his connections working in the music industry OUTSIDE of the booth, has become known for cultivating multi-genre sets that leave nothing to be desired. Can you go all night long?