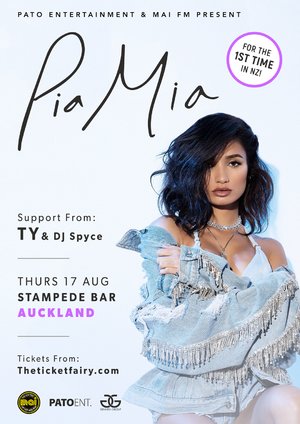 Current international pop sensation, Pia Mia, is coming to Auckland this month to play a one-off show at the Stampede Bar on August 17.

Hailing from Guam, Pia Mia is a model, dancer and style icon who has built a strong following around the world with her catchy hits including ‘We Should Be Together’; ‘Do It Again’ (with Chris Brown and Tyga); and her latest single - ‘I’m A Fan’ featuring Jeremih.

Pia Mia began her career as a model. However, blessed with a beautiful voice, she dreamt of being a musician and in 2013 met Chris Brown’s manager, AbouThiam. At the same time she was introduced to Nicholas Balding better known as ‘NicNac’, a rapper and producer, and immediately they got down to work.

The same year she released a cover of Drake’s ‘Hold On, We’re Going Home’, which received millions of views and went viral on social media. She then released ‘Red Love’ from her debut EP, THE GIFT. This led to a contract with Interscope Records. She sang the title track of Sci-Fi movie Divergent – ‘Fight For You’ - along with Chance the Rapper, which placed #16 on the US Billboard 200. The next year released ‘Do It Again’ featuring Chris Brown and Tyga - reached top 8 on the UK Top 40 list followed by her second single ‘Touch’ also making it to the music charts.

Auckland – don’t miss your chance to see the superstar Pia Mia live, with support from Tyree - one night only, in Auckland on Thursday August 17.