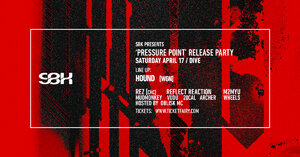 SBK Recordings touches down for their first Label Night at Dive in Dunedin, celebrating the release of 'Pressure Point / Amnesia' [SBK006] by HOUND.

Lucas Iles aka HOUND is a Drum and Bass producer and DJ originally from Christchurch with a unique style and presence to his productions.

Hound brings a set of tightly produced original tracks to the forefront of his live sets while showcasing his wide range of influences and inspirations.

SBK006 is his first label release, and at just 20 years of age there is great intrigue over what the future might hold for HOUND.

Over the past 6 months the SBK Imprint has gone from strength to strength with a diverse array of 170 centric beats from across the spectrum from artists Luca, Reflect Reaction, Monika, Habit, RQ, and EXD.

The releases have been turning heads abroad and received support from notable luminaries such as DJ Storm, Mark System, and Villem, as well as garnering exclusives features via underground tastemaker Data Transmission.

Back home in Aotearoa SBK Label Nights have been a bastion of diversity throughout the South Island, featuring carefully curated line-ups that extend well beyond the scope of drum & bass.

To use the word ‘excited’ would not underpin the level of anticipation generated by adding DIVE to that list. Considering the artists on on the line-up clearly that would be a MASSIVE understatement.

For those that don’t know SBK stands for ‘Subz n Breakz Kru’.

The Kru laid the foundations for urban breakbeat music in the Deep South, hosting the biggest names in global and national Drum & Bass along the way, and creating a blueprint for the development of the movement in the region.

++ Keep in mind in those early years drum and bass was only obtainable on vinyl. The legends at Subtronix were the NZ source, and a select number of record stores acted as tributaries.

The internet played virtually no role in advertising or distribution. It truly was an underground phenomenon, and SBK were at the forefront of a contingent of NZ junglists spreading the new sound. ++

(( Naturally at this point we have to say:

MAXIMUM RESPECT goes out to each and every DJ, MC, promoter, and ALL the Headz that shared that journey with us. We have seen a generation of you come and go, yet we still fondly remember those formative years; and such memories remain at the core of what we do today. ))

So the Kru played across the country from the smallest clubs to the biggest festivals, which might seem somewhat ordinary today, but this was in an era where very few ‘above ground’ festivals even had DJs.

Interestingly there was even a ban on DJs at some University Orientations … “sorry live music only”… and some nightclubs would allow only hip hop, house or techno.

This created the impetus for self run, self promoted underground warehouse raves (which turned out to be hella fun! ). As popularity grew drum and bass became more widely accepted at local clubs. SBK began hosting club nights, as well as DJ & production competitions, and even ran an annual mini festival known as ‘Crave’ at Longbeach attracting over 2000 people at it's peak.

By 2007 Drum & Bass had well and truly blown up across NZ and the focus for SBK was fast moving to production. The SBK Recordings concept came into fruition with first release, a 5-track EP, named ‘Enter The Blue’ by Vanadis.

The EP featured collaborations with Pacific Heights and Cern and was playlisted across the B-Net and student radio stations.

The EP focussed on a deep and subtle sound that at that time was rare in the New Zealand production scene.

Nightshade (Woosh) and Luca (Webb)... both finding success in their respective fields.

Then it wasn’t until 2017 that the duo reconnected again, this time in the UK, and the motivation to relaunch the SBK Imprint re-emerged.

Fast forward to present time, the label has been relaunched during a global pandemic (wtf!), and penned an additional 5 releases with many more on the way.

The back catalogue is fast becoming a diverse and delectable snapshot of underground drum and bass in Aotearoa.

No gimmicks, no bullshit, no bandwagoning.

Or as the First Lady of Drum and Bass DJ Storm described a recent SBK release:

Coming up next on the label we have a flurry of EPs from emerging artists such as Chisel, Hound, T-Flexx, and Surveillance, along with full length albums from Habit and Reflect Reaction.

Couple that with following ongoing programs ~

~ it’s clear to see with all things SBK there will be no slow to the flow, you know !!!