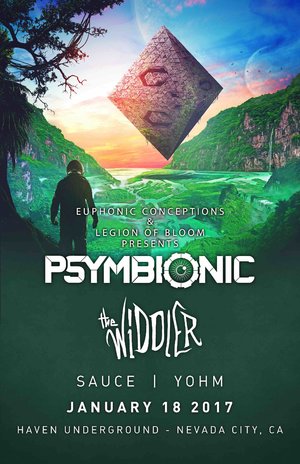 As a part of the upcoming generation of electronic music producers, Psymbionic creates aural experiences that demonstrate the possibility for multi-tempo Bass Music and culture to exist within a range of more divergent influences.

With this latest project, John Burcham has been moving bodies and turning heads for several years, playing with acts such as Bassnectar, STS9, Beats Antique, ill.Gates, Excision, EOTO, and Tipper. In addition to festival appearances that include Nocturnal, Wakarusa, and Sonic Bloom, Psymbionic demonstrates heavy involvement both on the stage and behind the scenes at electronic showcases such as his local SXSW in Austin, TX. Burcham’s work informs his repertoire with roots in the furthest reaches of the electronic music scene, and grants him a unique perspective on each crowd through the latest developments of the industry.

In a live show context, Psymbionic confronts mixes that are limited to the scope of the build and release, avoiding an industry epidemic of drop-monotony that overpowers the flow of music. Burcham seeks to prove that there are more powerful influences in moving a crowd than simple anticipation, providing an interwoven dynamic that relies on the strength of his blend, rather than the sole force or familiarity of the apex.

Psymbionic’s theory of music is a journey that doesn’t visit the same place twice, building excitement for what’s next not because you can anticipate it, but because you’ve never been there before.

Born in Tel Aviv and living in Austin, TX, The Widdler has been playing and producing music since he was 10. Renowned in the American dubstep scene since his inception, the Widdler releases such as Sensei Samurai , Froggy Style, and Lady Dub are regarded as classics in the bass genre. Supported by artists like Bassnectar, Mary Anne Hobbes, Excision, Bukez Finezt, and 6Blocc, member of US imprints Dank 'N' Dirty Dubz, and MalLabel Music, represented by Circle Talent Agency, and most recently signed to Owsla Records, The Widdler is widely recognized as an innovator and originator of dub sound. Constantly practicing, The Widdler incorporates mix sessions into his daily routine, which translates to his flawless performances at shows; headlining with the likes of Doctor P, Reso, Ajappai, and Tipper throughout the world. Currently spending his time between gigs in the studio, The Widdler is working hard to bring the freshest tunes to his fans. Taking influence from various genres of music and lifestyle, his tunes comes in all shapes and colors. From the chilled reggae dubs and blue mood atmospheres to the mean menacing throbs of bass and percussion, The Widdler knows how to weave his musical roots with his production that makes each set entirely special.