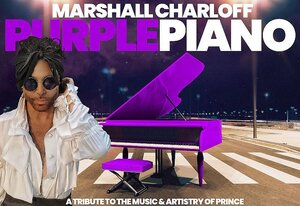 Nearly five years after the pop music icon Prince's untimely death, Marshall Charloff has created a unique one-man tribute dedicated to the artistry and music of the legendary Prince called The Purple Piano.

In January 2016, at age 57, Prince began what would ultimately become his last tour entitled "the Piano & a Microphone." The tour was a series of solo shows that featured just him, his purple piano, and an incredible discography of songs.

On January 21, 2016, the first performance was played to a small crowd at Paisley Park; and followed with an album "the Piano & a Microphone 1983."

The Purple Piano, created by Marshall Charloff, is a heartfelt and intimate tribute to these very unique performances.

Marshall Charloff has performed nationwide fronting world-class symphonies in most major cities in the US and Canada, played keys in the Atlanta Rhythm Section, and since 2011, tours fronting the celebrated Purple xPeRIeNCE - arguably the greatest tribute to Prince in the world, and co-founded by Matt "Doctor" Fink from Prince & the Revolution.

Marshall is featured on recordings with Prince on the album 94 East, where he plays both keyboards and bass guitar, and recently collaborated with Prince's sister Sharon Nelson to co-write and record "Colours." Pepe Willie, who discovered Marshall, was also responsible for getting Prince's career up and running.