Racing - Must Be The Moon Tour 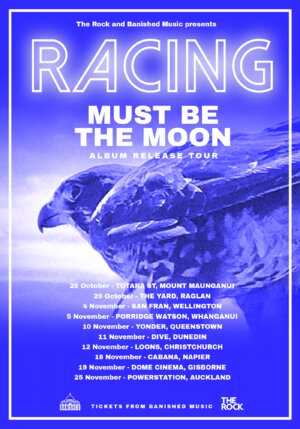 RACING
MUST BE THE MOON ALBUM RELEASE TOUR

Racing’s sophomore album ‘Must Be The Moon’ is dropping on September 30. To celebrate its release, the band are hitting the road for a string of spring shows – culminating in a headline slot at Auckland’s Powerstation on November 25. From the provincial pubs to the city centres, the Must Be The Moon tour will span both islands and showcase this explosive new record within a notoriously strong live show.

Must Be The Moon is Racing’s second self-produced album and follows on from 2018’s Real Dancing, from which three songs reached number one on the Rock All Airplay charts – including smash hit ‘Run Wild,’ which spent 50 weeks in the charts. Beginning as a series of rough recordings in 2019, new record Must Be The Moon went through several incarnations to get where it is today. Recorded in Auckland’s Lab Studios and mixed by UK legend Dave Eringa (The Who, Manic Street Preachers) the time has finally arrived for its long-anticipated release.