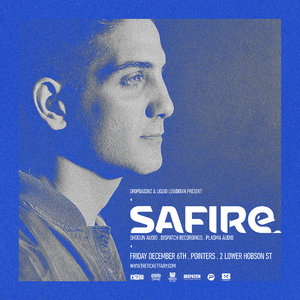 Sadly Safire has been in a car accident and has leg injuries so cannot make it to the gig tonight. Any ticket purchasers that would like a refund can get in touch and we'll arrange that. We will are still rolling out the event but with a restructure of locals. It will be a flat $10 on the door. Amended set times here:

Safire is regarded as one of Australia’s finest Bass Beats & Drum and Bass artists, whilst moving from strength to strength over the last couple of years with most recent signings to Noisia's 'Invisible recordings', Friction's 'Shogun Audio' & Dispatch Recordings.

Safire has been moulding his craft for the past 10 years whilst running the long-standing night 'Broken Beat Assault' orchestrating the highest quality DnB events in Melbourne & most recently setting up his own label 'Plasma Audio' launched at the beginning of 2014 featuring some of dnb's top producers such as Alix Perez, Icicle, Sabre (Ivy Lab), DLR, Hybris and more.