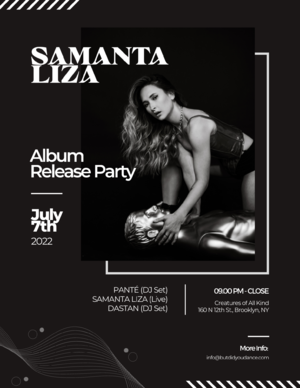 Celebrate Days of E.N.D. album release with Samanta Liza and friends at Creatures of All Kind rooftop in Williamsburg.

To be released on July 8 via independent label But Did You Dance, Days Of E.N.D. is the exciting debut album from Brooklyn-based singer/songwriter, multi-instrumentalist, composer, DJ, and producer of Swedish and Indonesian-Chinese heritage SAMANTA LIZA. The highly anticipated album comes on the back of a glorious past 12 months from the electronica rising star, beginning with the release of her debut EP, Back To Earth, last summer, which charted at #8 on the Beatport Deep House Top 100 Release Chart and peaked at #14 on the iTunes Dance Albums Chart.

Speaking about the inspiration behind Days Of E.N.D., Samanta Liza says, “There are few things in this world that matter more to me than my relationships - both romantic and platonic. Tapping into my own story and the stories of others, I explore what it truly means to let yourself feel. Being an empath is both exhausting and energizing at the same time. But it is my connection to others that keeps me alive and propels me forward. It is because of people that I feel excited. They give me purpose. Through this album, I hope to showcase the power of people. The power of understanding your emotions. And the power of introspection”.

Born in Hawaii and residing in Brooklyn, Samanta Liza is a global citizen, having also lived in London, Sweden, Kuwait, Qatar, Florida, and Shanghai. She brings this cultural and musical melting pot to her artistry, and it can be heard across her music, which excellently fuses pop, dance, indie, and electronic music to great effect, and her renowned DJ sets, centered around her ‘innocently sensual’ live vocals and percussions flowing into a true hybrid performance of original melodic and high-energy mixes. Her new album Days Of E.N.D. perfectly encapsulates Samanta’s purpose of creating emotional journeys that are transformative for her listener.

Dastan translates to story. As a journeyman of dance music, and a fan of the long form experience, he’s been obsessed with quality sound and the state of being lost in music. Dastan started as a resident DJ in Washington, D.C. for the last seven years, championing residencies in seminal nightclubs Flash & Eighteenth Street Lounge, as well as in the underground and festival circuit. In 2020, he found a family as a resident with Nick Warren’s imprint, The Soundgarden. The momentum has been consistent where he’s twice been the Global Journey DJ for Tomorrowland festival in Belgium, touring Europe, North & South America, as well as in remote locations and festivals where he’s been summoned. Dastan has been called upon to support alongside some of his own heroes, including Audiofly, Nick Warren, Hernan Cattaneo, Goldcap, Behrouz, Oliver Koletzki, Armen Miran, and Enamour. Always finding himself on the darker side of deep house/techno his sets dance to a strong middle eastern and tribal flair.

Born in Manhattan and raised in Beirut, Panté has translated his early influences of trance and Middle Eastern music into a unique melodic house blend that has proved mesmerizing and captivating with his initial releases on the globally-acclaimed Dutch label Armada Music. He takes inspiration since his early deck-spinning days which started as early as 15 years old, allowing him to perfect his craft and arming him today with a unique taste in music that almost always includes an arsenal of classics and nostalgics while leaving a lasting impression on the unsuspecting crowd. Back in NYC, his musical journey is still considered in its early stages and while his productions are still raw and ripe for the picking, his releases have seen support from the likes of Vintage Culture, Leftwing : Kody and Pretty Pink among others.