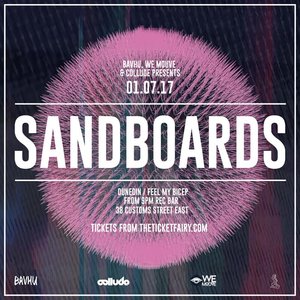 Hailing from Dunedin, they've taken inspiration from the '80s do-it-yourself indie bands of Flying Nun Records fame the town is known for and instead, are riding a wave of synth-soaked house that's gained an amazing amount of DJ support in the last 12 months, first fuelled by their debut on Krystal Klear's Cold Tonic label with sexually charged club cut, Nothing But A Freak.

In the process, they also caught the eye of house royalty Bicep and found themselves being the first outsider act to release on the pair's Feel My Bicep imprint with 'Visa'. In fact, Shinra's remix of the title-track found its way into our list of best remixes from the past year, which means we'll be expected a whole host of audible magic from Sandboards in 2017.