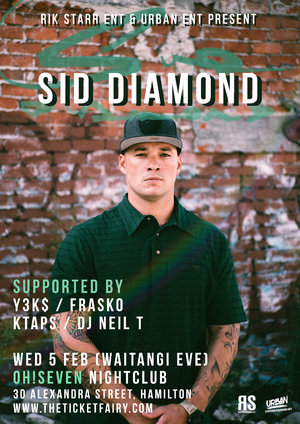 Sid Diamond previously known by his former stage name Young Sid (one third of iconic Hip-hop trio Smashproof), is a New Zealand rapper, songwriter and actor. Sid Diamond is one of the best-selling artists in New Zealand and with Smashproof shattered a 23-year-old record for the longest consecutive run at number one by a New Zealand-based act on the country's singles chart with their seminal hit ‘Brother’ featuring Gin Wigmore and won Best Video, Most Singles Sold and People’s Choice Awards in 2009.

Break through single ‘Hood Like Me’ revolutionized the way rap music was portrayed in New Zealand and threw a defiant middle-finger up to an industry that up until then had used local rap as a marketing gimmick to sell products and exploit in offensive ways and was the precursor to ‘Brother’.

Taking great pride in being revered as ‘the peoples’ rapper, Sid Diamond has never been one to hold his tongue or to ‘fit in’ for the safety of people-pleasing. Sid Diamond is now poised to release new music that will touch the soul and ignite the flames of unrest within New Zealand as he once more takes our stories, our drama, our issues and our nation to the world.