Love Not Lost , Wellington [All Ages] 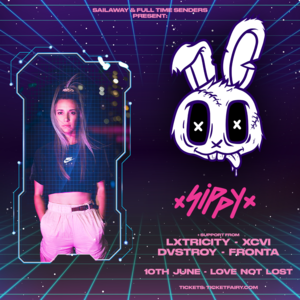 SIPPY -
A Sydney based bass music machine – anyone who’s spent time on the Australian bass music circuit knows the name. She’s built her career blasting her signature gut-rattling seizure-inducing sounds through the sound systems of her country’s famous clubs and festivals, including residencies at Chinese Laundry and The World Bar, and a graduate of the famous ICON Collective Music Production school in Los Angeles. Sippy prides herself on bringing much needed courage and realism to the scene. As a result, her name is synonymous with a fearlessly filthy, heavy, extremely creative and precise bass-forward sound. She counts the world’s biggest Bass and EDM producers among her most avid and vocal supporters including Zeds Dead, Bear Grillz, Shockone, plus more.