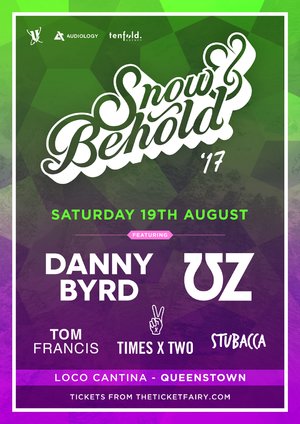 A festival spec line-up rammed into a intimate indoor venue in the heart of Queenstown.

$42 earlybird tickets on sale 7pm Thursday from The Ticket Fairy

► DANNY BYRD (UK)
One of the very first artists to sign to the fledgling Hospital label - way back at the turn of the millennium, Danny Byrd's own inimitable take on soulful, vocal Drum + Bass has become a staple in the scene. His use of hip hop, house and R&B influences immediately began turning heads with his first Hospital outings. The Bath based, brandy drinking producer has been responsible from some massive rave anthems over the years, which has gained him Radio One success and international recognition.

► UZ (?)
Something of a man of mystery, UZ emerged into the world of constantly evolving bass music back in 2012, and his intense musical creativity has kept fans guessing ever since. Widely considered one of the founding fathers of the floor-shattering trap sound that has taken the world by storm, UZ’s innovative approach to production and impeccable reputation as a tastemaker has kept him on top of the pile for the past five years.

UZ’s touring schedule continues to take him across the globe several times over, appearing in Australia, Canada, Asia, Europe, South America and South Africa. Representing bass music at its finest, he is increasingly in demand from international festivals such as Coachella, Sonar, Ultra, Stereosonic and EDC.

► TOM FRANCIS
Tom let's the music speak for itself.


► TIMES X TWO
A duo that was formed by best friends Cader, and Zee. Their earlier single "Run" is getting heat worldwide, as well as their latest single "Way 2 Real" which is a dancefloor smash anthem!

► STUBACCA
Queenstowns favourite local is ready to smash his first headline set with us. KEEN!