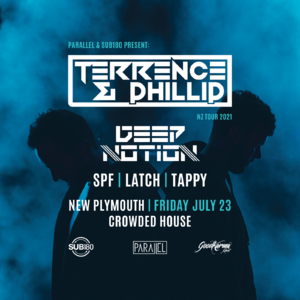 Brothers Terrence and Phillip (real names) are a production duo based out of Perth, Australia. Having burst onto the scene with a classic stomper, “DnB Religion”, the pair continue to showcase their charismatic production skills and wonky basslines, with free releases such as “Slang”, “Just a Feeling” and “Static”.

Having sold out their New Zealand tour in 2019, the Aussies are returning and are ready for their debut show in the country's greatest region - Taranaki.

Wellington born, now Auckland based DJ/Producer - Deep Notion is rapidly becoming one of New Zealand's hottest up-and-coming acts. No stranger to 4 decks, his fast paced mixing exudes energy and intensity, which flow deep into his production. With releases on Bass Rabbit, Raving Panda, Serotone Recordings, Night45 and many more in the pipeline he always comes equipped with serious heat.