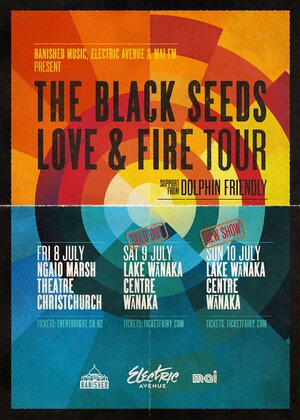 TopInfluencers
Aotearoa eight-piece The Black Seeds have today announced a 7-date Aotearoa tour in support of their upcoming new album, LOVE & FIRE (released June 17).
Kicking off with a show at Totara St in Mount Mauganui on July 1, the tour then visits six other New Zealand locations –  Hastings on July 2, Christchurch on July 8 and Wānaka on July 9 and 10. Travelling back up north, The Black Seeds will visit New Plymouth on August 5, Auckland on August 6 and Wellington on August 7 to celebrate the end of the tour in their hometown!

This is The Black Seeds’ first national tour in five years and the band are excited to be back on the road playing their new material; as well as all The Black Seeds’ classics fans know and love.

“It’s always great to tour a new album in Aotearoa. I think I personally get more nervous or just have higher expectations of myself playing new songs on a NZ album release tour… I really look forward to sharing our music,” says Dan Weetman