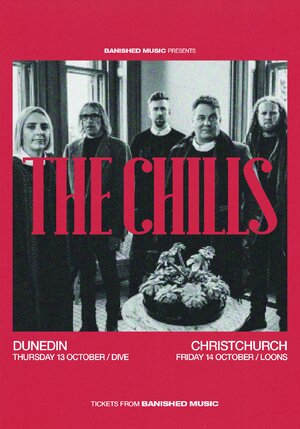 In May 2021, The Chills released their seventh studio album ‘Scatterbrain’ a glorious self-examination of Martin Phillipps’ songwriting, following the release of hugely successful ‘Snowbound’ (2018) and the critically-acclaimed movie ‘The Chills: The Triumph And Tragedy Of Martin Phillipps’ in 2019. ‘Scatterbrain’ is a mature and honest reflection on life, destiny and the fate of our times delivered in beautiful melodies with Phillipps’ trademarked incisive turn of phrase.

The Chills have a large and loyal cult following around the world built on the strength of their recording and live shows in over 40 countries - including being only the third band from the West to play in East Germany in 1987. There have also been numerous festival appearances including Glastonbury, Primavera Sound, and SXSW.