The D4 - 6TWENTY ONE Tour | Wellington 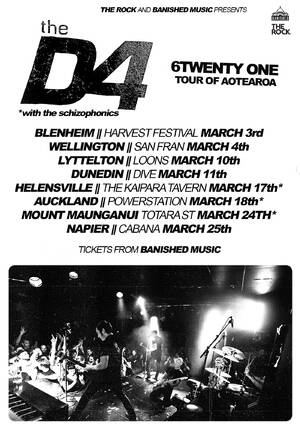 October 28 2022 marks the 21st anniversary of The D4’s critically acclaimed debut album, ‘6TWENTY’.  To celebrate The D4 are not only rereleasing the album, but are hitting the road on a nationwide tour in March 2023.

This is a rare opportunity to see the band LIVE. A full force, sonic assault!!!
Adding fuel to the fire, The D4 will be joined by riotous San Diego rock trio, The Schizophonics for three shows.

Between 1998-2006, The D4 took on the world and their run sheet is impressive. They toured relentlessly playing clubs and festivals in the US, UK, Japan, Europe, Australia and New Zealand - these included, SXSW, Glastonbury, Reading, Leeds, Fuji Rock, Pukkelpop and The Big Day Out. On the strength of their live shows and the reception of the debut album, The D4 were lauded by stalwarts of the scene past and present and invited to play and tour alongside legacy heroes and contemporary upstarts including: The New York Dolls, the Dictators, Bo Diddley, the Pretty Things, Iggy and the Stooges, Guitar Wolf, and the Hives.

“One of the greatest Kiwi live bands...” Graham Reid, Elsewhere.

The D4 was assembled by vocalist/guitarists Dion Lunadon and Jimmy Christmas who put together a collection of songs and built a four-piece combo, featuring founding members English Jake and Rich Mixture. The band was later enhanced by members Vaughan Williams (bass) and Beaver Pooley (drums).

Rock'n'roll fans will be treated to their notorious and explosive live show across the country, which comes with a reputation for amplifiers catching on fire and sweat dripping from the ceiling. Expect the band to play the classics  ‘Rock'n'Roll Motherfucker’, ‘Party’, ‘Come On!’, ‘Get Loose’ and ‘Ladies Man’ amongst a high octane set.

In addition to the shows, to celebrate the anniversary of ‘6TWENTY’, Warner Music NZ and Rhythmethod will be pressing a limited run of '6TWENTY ONE' on 180g vinyl, accompanied by a new take on the album cover and extensive liner notes written by Dion and Jimmy.

Over the last few years, The Schizophonics have built up a formidable reputation around the world as an explosive live act. One dash James Brown, one dash MC5, one dash Fanny - San Diego's favourite fuzzed out trio. Featuring husband and wife Pat and Lety Beers (real name!) on guitar and drums respectively , and bassist Stephen Rey, the band make their third visit to Aotearoa, this time to join forces with The D4.