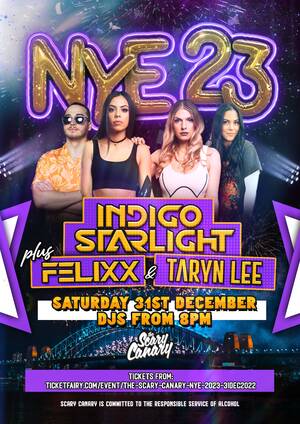 If you want a fun and exciting night on your New year! Come see in the New Year the Scary way! Our DJs will be playing the best in party music for you all to sing at the top of your lungs right through into the early hours of the new year.

A quick 5 minute walk down to the harbourside fireworks that will be on display at both 9pm and 12 midnight.

​Open from 12 midday. Entertainment from 8pm.

​Indigo Starlight have harnessed their funky and fresh charisma as a surprise package to hit the Australian nightclub scene. Drawing inspiration from artists such as Pink, Lady Gaga and NERVO, these pocket rockets have always added a personalized touch to their shows using their repertoire of talents and knowledge in music.

​Incorporating a Keytar into their sets, this savvy duo continue to uniquely showcase an element of live performance. Leaving no stone unturned these bubbly and high energy artists have already managed to capture a wide audience by incorporating many genres into their performances while staying true to their passion for dance music.

​This multi-talented duo has already built an enthusiastic following having toured Internationally throughout China as well as having performed in some of Australia’s most prestigious and popular nightclubs such as the Ivy, Marquee Sydney, Lucky Thursdays, Home Nightclub, Light at Crown, Family Nightclub and Inferno Nightclub to name a few. The musical edification of Indigo Starlight is set to take over the scene with their captivating flair that will leave you lovers of dance begging for more.

Following a string of high energy feelgood international shows, Felixx is back on home soil with his signature fast-paced fun commercial house and party DJ sets. Felixx’s electrifying and uplifting presence has cemented his reputation as one of Australia’s top party DJs.
Felixx’s dedication to dance floors has been demonstrated with 6 back-to-back top 10 original tracks in ARIA Club Charts, including a number 1 remix. On the airwaves, he’s been heard across the Hit Network, Radio Metro, and Raw FM.

​One of Australia's most exciting up and coming new female artists to be hit the scene. Tarryn Lee loves to rock a dancefloor and brings 100% to each of her shows. Expect to be impressed by her ability on the ones and twos.