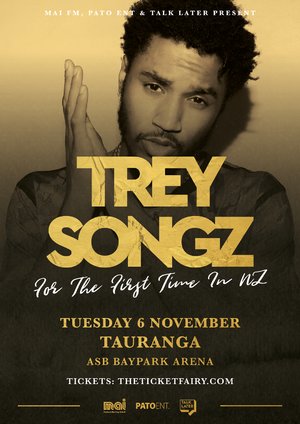 TREY SONGZ
For his first ever tour in New Zealand!

American hitmaker Trey Songz has today announced his first ever New Zealand tour for this November.

Presented by Mai FM, Pato Entertainment and Talk Later, the Grammy-nominated R&B sensation will play Logan Campbell in Auckland on November 3, ASB Bay Park Arena in Tauranga on November 6 and TSB Arena in Wellington on November 7.

The tour follows hot on the heels of the success of his 2017 record, TREMAINE THE ALBUM, which harked back to the R&B masterpieces that defined generations with their swagger and style.


“This album leaves you with an array of emotions, but most importantly leaves you yearning for more” - Revolt

“Powered by singles including ‘Playboy’, ‘Animal’ and ‘Song Goes Off’, Songz sticks to his traditional landscape of love, sex and passion” - Billboard

Songz made his debut in 2005, smashing through with his first album, GOTTA MAKE IT. He returned in 2007 with TREY DAY. Both records yielded the Top 10 singles ‘Girl Tonight’, ‘Last Time’ and ‘Can’t Help But Wait’ and established Songz as one of the most notable R&B singers in the world.

In 2009 he released READY, which he swiftly followed in 2010 with PASSION, PAIN & PLEASURE; the triumphant #1 RIAA Gold-Certified album CHAPTER V in 2012 and TRIGGA in 2014, which debuted at #1 on the Billboard charts and featured the hit single ‘Touchin’, Lovin’ featuring Nicki Minaj.

Since his arrival on the scene, Songz has achieved three Grammy Award nominations, landed back-to-back #1 debuts on the Billboard Top 200 and staunchly carried a tradition of classic R&B into the 21st century.

He has seduced sold-out audiences everywhere around the globe, earning the nickname as the man who ‘invented sex’ with his sultry and sexy show. When he’s not behind the mic, Songz can be found on the big screen, with roles in blockbusters such as Texas Chainsaw Massacre 3D and Baggage Claim.

Don’t miss the chance to see one of R&B’s most compelling figures live in concert in New Zealand this November.