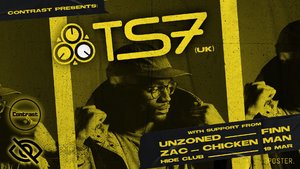 'TS7'
Born and raised in Bradford UK, it was from the age of just 5 that TS7 realised how big his passion for music really was.
He's established himself as one of the leading Producer/DJ's in the UK with a number of tracks making a massive impact across club land & leading festivals with Crucast around the world such as Parklife, Creamfields, Boomtown, Bassfest & Forbidden Forest.

More recently, TS7 has released music with Bass Powerhouses Night Bass & Crucast, including releasing 6 tracks independently on his own imprint 'TS7 Recordings'.
With over 5.9m + Spotify streams in 2019 alone, playlisted on NMF, and a forthcoming debut album, 2020 is looking like a big year for the bass specialist.
Alongside his stellar production, he has toured and played shows in the biggest venues and festivals across the UK and Europe incessantly and now landing here in AUS & NZ.
Whether it’s hard hitting club tracks, or more melodic and emotive cuts, TS7’s appetite for innovative production and adaptability remains stronger than ever.