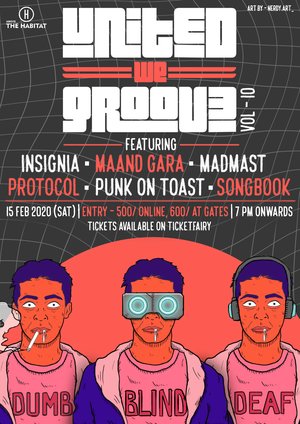 Since its inception in Oct 2018, we have had over 45 bands/artists spreading their magic from all different genres like Rock , Hip hop, Metal , Singer Songwriter, Blues , Hindi Fusion, Rap to name a few.

The thought behind this property is to bring together audiences who follow particular genres of music, and curate an experience where they discover and get more than what they had come expecting for.

For this edition, the lineup has

Punk On Toast:
PoT are a 4 piece Mumbai based Punk rock band formed in late 2009.
Punk On Toast played their first live gig at the Stupidditties 5 Album Launch at B69 by Bajaao. Since then, Punk On Toast has played many gigs at many top venues in India and have released a 5-track EP “For Hire" in 2015 followed by the debut album, "We Abuse A Lot, So What?" in 2018 which are now available for download on all leading digital platforms, which has got a great response from all over the world.

Insignia:
We(Insignia) are a three piece outfit From Thane, Maharashtra. We like punk rock. It speaks to us. We like hooks, melodies, three minute songs, blazing speed, snap-happy numbers, extreme levels of volume, mellow acoustic tunes, The Beatles, The clash, The Pixies, Nirvana, Husker Du, beer, R.E.M, Fugazi, Chinese food, and playing each other’s instruments. We would also like to keep this band bio really short. Peace.

Madmast:
Madmast is a Hindi Pop Rock act, and their music can be described as Sublime Hindi-Urdu lyrics blended into tasteful musical arrangements and riveting melodies.

They are into creating original music and are recording their debut album at this time.

Protocol:
Protocol is a Progressive metal act based out of Bombay whose music is influenced by bands like Tesseract, Evanesence, Periphery, Lacuna Coil to name a few, they have been around since 2012 and are working on their album “Friars Lantern”

Maand Gara:
Maand Gara is a 4 piece instrumental Prog/Jazz band based out of Mumbai who are also students of the True School Of Music, they are the youngest band on the lineup but definitely deliver power packed Fart Bombs