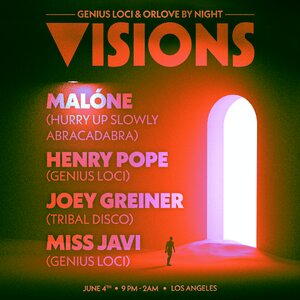 Curating and cultivating the best talent from around the globe.

Community, creativity, and place were we all belong.

For our first installment we proudly present:

More about the artists

Born and raised in Miami of Cuban descent, Malone’s passion for music
started at an early age with his uncle, who was a DJ in Miami throughout the
80 & 90s. Growing up with music his entire life, Malone has been djing/producing electronic dance music since 2013.

Malone has become one of Miami’s prominent up & coming dj/producers in the underground music scene the last couple of years... With releases on labels such as Saved, Toolroom, Club Sweat, Abracadabra and many more underground imprints.

Malone is a resident with his own weekly show RITMO on Blond:ish's AbracadabraTV label/livestream platform, showcasing his talents and passion for everything Afro House, Minimal/Deep House & Tech. Malone's newest and biggest project in 2021 will be the launch of his own label "Hurry Up Slowly" based out of Miami.

Henry Pope has smashed the edge off the cubist and injected color into the monochromatic. For the past several years his music has been popping up on radio stations around the globe, tastemaker playlists, and huge festival lineups.

Riding a wave of critical acclaim and triumphs at some of the world’s largest festivals, Henry Pope continues to grow his rabid fan base with a steady stream of top notch originals, remixes, and conceptual videos.

Joey Greiner is an International DJ, Storyteller, and Community Builder from New York. He’s been performing music for audiences of thousands around the world for over 15 years. He helps people, organizations and businesses tell their stories by creating captivating digital content and live experiences.

Joey is the founder of Converge, a collective of wellness professionals & entrepreneurs that facilitates programming for businesses, retail stores, premium residences & music festivals.

Since 2021 Joey has been the Wellness Director of Elements Music & Arts Festival and in 2022 has joined the production team of the Compass at Lightning In a Bottle festival.

She is a storyteller, weaving melody and surfing vibrations.

Altering the frequencies of crowds.

She believes that the purpose of life is to create beauty, to empower, inspire and uplift.

Do you want to dance with her?