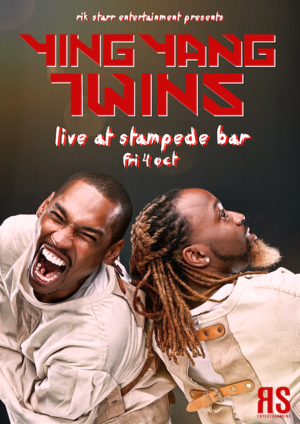 Or maybe it’s how they push the envelope on decency on the foul-mouthed, triple-X-rated “Wait (The Whisper Song)” and hard-edged hood classic “What’s Happnin” featuring Trick Daddy. Or it could be the way they effortlessly rise to any occasion on hits as diverse as their collaboration on Lil Jon’s “Get Low” or their crossover single “Dangerous” featuring Wyclef Jean.

Whatever the reason behind their six-album career of megahits and platinum plaques, Ying Yang Twins have defined the sound of club music in hip hop for more than a decade. Made up of Kaine (Eric Jackson) and D-Roc (DeAngelo Holmes), these brothers from other mothers know how to get any party started right.

Continuing to turn dance floors out and operating at an average of 100 beats per minute, Ying Yang Twins will be performing LIVE at Stampede Bar, South Auckland. So get ready to shake that ass and get CRUNK!!!